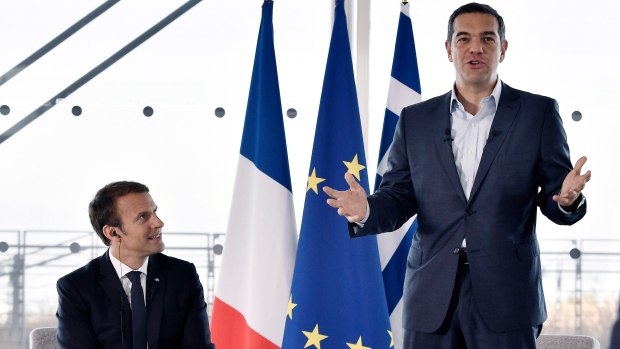 Addressing a round-table of Greek and French business leaders Friday, Macron said Greece was "forced" to choose non-European investors "because the Europeans were not there."

French enterprises, he said with certainty, would ramp up their investments in Greece, a country that's spent much of the past decade hurtling from one crisis to the next and seen its economy shrink by a quarter and unemployment and poverty levels swell alarmingly.

A failure to respond, he said, would show that Europeans have "no faith in Europe."

Greece has relied on international bailouts to stay afloat, after losing bond market access in 2010. Following years of belt-tightening that's seen improvements in the country's annual budget, Greece's bailout era is due to end in the summer of 2018.

In return for the money that's prevented the country's bankruptcy, Greece has been compelled to institute a wide array of economic reforms, including the sale of a raft of state-owned assets, such as airports, ports, railways and real estate. Many of those have ended up in the hands of non-European investors.

In two of the biggest privatization projects, China's Cosco expanded its stake in Greece's main port of Piraeus to 67 per cent, while Chinese and Gulf investors are involved in an 8 billion-euro ($9.6 billion) development scheme at the site of the old Athens airport, which had also been used for the 2004 Olympic Games.

Macron's comments come a day after he met Greek Prime Minister Alexis Tsipras and presented his vision for Europe in a speech at the site of the ancient Athenian assembly, seen as an enduring icon of democracy worldwide.

Speaking with the ancient Acropolis as a backdrop, he urged the European Union to carry out six-month national reviews on EU reforms before imposing them. That's been interpreted as a signal that the new French president is distancing himself somewhat from the German-backed approach that's been based on fiscal discipline within the 19-country eurozone.

"It would be a mistake to abandon the European ideal," Macron said Thursday. "We must rediscover the enthusiasm that the union was founded upon and change, not with technocrats and not with bureaucracy."

Later Friday on his second and final day in Greece, Macron is due to visit French cultural institutions in Athens.