Journalists across Mexico protest killings of 3 this year 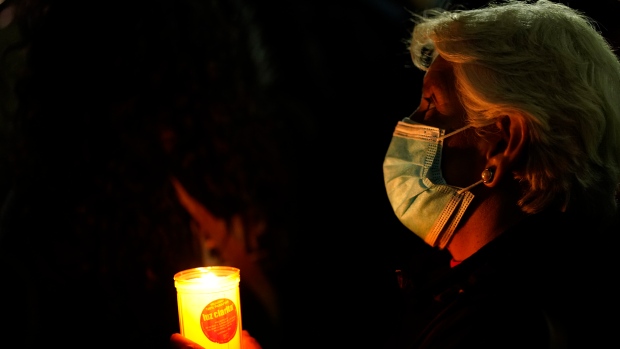 A woman holds a candle during a national protest against the murder of journalist Lourdes Maldonado and freelance photojournalist Margarito MartÃ­nez, in Mexico City, Tuesday, Jan. 25, 2022. Mexico's Interior Undersecretary Alejandro Encinas said recently that more than 90% of murders of journalists and rights defenders remain unresolved, despite a government system meant to protect them. (AP Photo/Eduardo Verdugo)

MEXICO CITY (AP) - Demonstrations were held Tuesday in more than a dozen cities across Mexico to protest the killings of three journalists in the the last two weeks.

In the border city of Tijuana, two journalists have been killed in the space of a week. On Jan. 17, crime photographer Margarito Martinez was gunned down outside his home. And on Jan. 23, reporter Lourdes Maldonado Lopez was found shot to death inside her car.

Dozens of reporters, photographers and supporters marched down a central boulevard in Tijuana in the evening, holding up signs with slogans like “Stop the Killing of Journalists, Not One More Death!”

Early Tuesday, news photographers laid their cameras on the ground outside Mexico City's National Palace. The spot was decorated with flowers, small signs saying “Press, don't shoot!” and photos of Maldonado, Martinez, and Jose Luis Gamboa, who was killed in the Gulf coast state of Veracruz on Jan. 10.

Inside the palace, President Andres Manuel Lopez Obrador faced journalists at his daily news briefing and promised again those responsible for the latest slaying would be punished, that there would not be impunity.

But precedent is not encouraging. Lopez Obrador's Interior Undersecretary Alejandro Encinas said recently that more than 90% of murders of journalists and rights defenders remain unresolved, despite a government system meant to protect them.

Later Tuesday, a couple of hundred journalists gathered in protest in front of the Interior Department headquarters in Mexico City. Some held candles in silent vigil, others signs demanding a halt to the killings and saying “I am outraged by silence.”

Photos of murdered journalists were projected onto the building's facade. Journalists chanted “Justice!” and “You are not alone!”

Laura Sanchez, a journalist from Baja California living in Mexico City, recounted some of the journalist murders in Tijuana over the years. She ridiculed the government program that is supposed to protect journalists, noting that Margarito Martinez was killed in the middle of the day and Lourdes Maldonado during the evening in Tijuana's most populous neighborhood.

The government program often gives journalists a button fob that can sound an emergency alarm, but some say it is useless.

“What the give us is a damned panic button, and you know what that button is? It is the number of the municipal police supervisor who is corrupt and sold out,” Sanchez said.

Protests were also held in the states of Veracruz, San Luis Potosi, Durango and Nayarit, with dozens of journalists gathering under placards reading “Not one more journalist killed,” and “The Truth can't be killed.”

Mexico remains the most dangerous place in the Western Hemisphere for journalists, despite the government's pledge to protect them. Some of the journalists killed recently had been under a government protection program that many say is insufficient.

In 2019, Maldonado came to Lopez Obrador's daily morning news briefing and asked for his support, help and labor justice. “Because I fear for my life,” she said.

Maldonado had been locked in a years-long labor dispute with Jaime Bonilla, who was elected governor of Baja California later that year as a candidate from Lopez Obrador's Morena party. He left office late last year.

Maldonado had recently announced that she won her dispute with a media company Bonilla owned after nine years of litigation.

Maldonado had collaborated with many outlets, but recently was doing a internet, radio and television show, “Brebaje,” focused on local news.

Martinez, the photographer gunned down outside his home, was well-known for covering the crime scene in violence-plagued Tijuana. He worked for the local news outlet Cadena Noticias, as well as for other national and international media outlets.

Sonia de Anda, an activist with a Tijuana journalists' group, said “we are emotionally devastated” by the killings.

“We go out and work, because we have to,” De Anda said, while noting there is “a lot of fear.”

The first journalist killed this year, Jose Luis Gamboa, was the director of the online news site Inforegio, in the state of Veracruz. The press group Reporters Without Borders wrote that “Gamboa had denounced and strongly criticized the relations between local authorities and organized crime.”

He reportedly suffered stab wounds in what may have been a robbery. He died on Jan. 10, but his relatives were not informed until Jan. 14.

Almost 50 journalists have been slain in Mexico since December 2018.

Encinas has said that in cases where the culprits have been identified, almost half are local officials.

Local officials in Mexico are often angered by corruption accusations against them, but in some cases they are also in league with criminal or business interests.

Sometimes media attention intensifies, as in the case of the murder of well-known journalist Javier Valdez in Sinaloa state in 2017, and there are arrests, trials and sentences. In Valdez's case, two men who carried out the murder are serving sentences and the Attorney General's Office has requested the extradition of the alleged mastermind, a drug trafficker in U.S. custody.

But that is an exception.

For more than three decades the Tijuana news outlet Zeta has published a black page in every edition to demand the mastermind of the murder of one of its founders in 1988 be brought to justice. At Zeta, there has been a 34-year wait for justice for founder Hector Felix Miranda.

People and journalists join a national protest against the murder of journalist Lourdes Maldonado and freelance photojournalist Margarito MartÃ­nez, outside the attorney general's office in Tijuana, Mexico, Tuesday, Jan. 25, 2022. Mexico's Interior Undersecretary Alejandro Encinas said recently that more than 90% of murders of journalists and rights defenders remain unresolved, despite a government system meant to protect them. (AP Photo/Marco Ugarte)