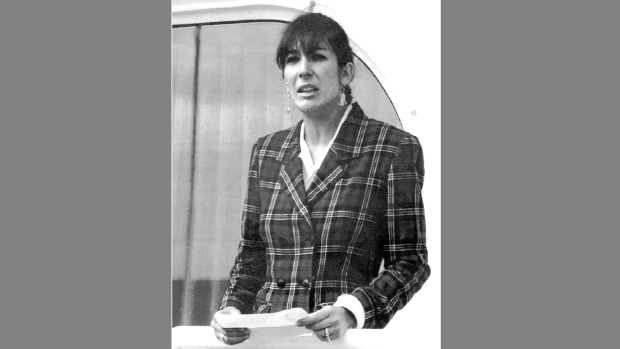 In this Nov. 7, 1991, file photo Ghislaine Maxwell, daughter of late British publisher Robert Maxwell, reads a statement in Spanish in which she expressed her family's gratitude to the Spanish authorities, aboard the "Lady Ghislaine" in Santa Cruz de Tenerife. Maxwell, a British socialite who was accused by many women of helping procure underage sex partners for Jeffrey Epstein, has been arrested in New Hampshire, the FBI said Thursday, July 2, 2020. (AP Photo/Dominique Mollard, File)

NEW YORK - Prosecutors on Sunday asked a judge to schedule a Friday court appearance in New York for Jeffrey Epstein's longtime associate to face charges she helped him recruit women to sexually abuse.

British socialite Ghislaine Maxwell, 58, was arrested Thursday at a $1 million estate on 156 acres that she purchased last December in Bradford, New Hampshire.

She has been detained without bail after agreeing to be moved to New York. Prosecutors have labeled her an “extreme risk of flight” and said they want her jailed until trial.

In a letter to a judge Sunday, prosecutors said they have communicated with Maxwell's defence lawyer, Christian Everdell, who would like a Friday bail hearing after written arguments are submitted by both sides Thursday and Friday. She will also be arraigned at the hearing.

She has previously repeatedly denied wrongdoing and called some claims against her “absolute rubbish.”

Maxwell has been indicted on multiple charges, including that she conspired to entice girls as young as 14 to engage in illegal sex acts with Epstein from 1994 through 1997 at Epstein's residences in New York City, Florida, and New Mexico and at Maxwell's residence in London. Prosecutors say the charges carry a potential penalty of up to 35 years in prison.

Epstein killed himself in a Manhattan jail last August while he awaited trial on federal sex trafficking charges.

Acting U.S. Attorney Audrey Strauss told a news conference Thursday that the investigation is continuing as the government seeks to hold anyone it finds aided Epstein accountable.

The arrest of Maxwell, a citizen of the U.S., France and the United Kingdom, came after she was described by some Epstein's victims as his chief enabler, someone who recruited and groomed young girls for abuse. Prosecutors say Maxwell had both a personal and professional relationship with Epstein.

Authorities said she sometimes hired girls to give him massages before joining along as Epstein tried to engage the girls in sex acts.

Prosecutors last week outlined some arguments to keep Maxwell detained. They cited her wealth, where she has had access to over $20 million in 15 bank accounts in recent years, along with her extensive international ties and the likelihood of a lengthy prison sentence if she is convicted.

Since Epstein was arrested in July 2019, Maxwell had been in hiding in locations in New England, sometimes masking her location by changing her phone number and listing her name as “G Max,” prosecutors said.