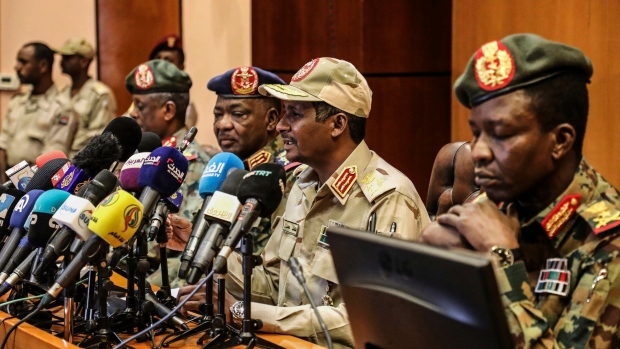 Both the protesters and the ruling military council said the violence was instigated by al-Bashir loyalists from within the security forces. Over the course of his 30-year rule, al-Bashir formed a shadowy security apparatus made up of several paramilitary groups.

The U.S. Embassy, however, blamed the military council, saying its attempts earlier in the day to remove roadblocks, and its use of tear gas against protesters, led to the violence later that night.

The clashes erupted after nightfall on Monday, when protests in Sudan usually swell during the Muslim holy month of Ramadan, which is marked by dawn to dusk fasting.

The Sudan Doctors Committee, which is part of the Sudanese Professionals Association that has been spearheading the protests since December, reported the six fatalities. The clashes took place in several locations across the country, including the main sit-in outside the military headquarters in the capital, Khartoum, the doctors union said.

Ahmed Rabie, a spokesman for the SPA, said more than 200 people were wounded. The military council confirmed the death of an army major and said three troops were wounded.

The SPA said remnants of al-Bashir's regime are stoking violence, hoping it will lead to the breakup of the sit-ins. The group urged protesters to remain peaceful.

“The military council is responsible for restoring security, protecting citizens and cracking down on the remnants of the ousted regime, its security apparatus and shadow brigades,” it said.

The military removed al-Bashir from power on April 11 after four months of mass protests, in which security forces killed around 100 protesters and at least five soldiers who tried to protect the demonstrators.

On Monday, Sudanese prosecutors announced that they have charged al-Bashir with involvement in killing and incitement to kill protesters during the uprising, according to the state news agency SUNA. It was not immediately clear what punishment he might face.

Al-Bashir, who was jailed in Khartoum days after his overthrow, is also wanted by the International Criminal Court on charges of war crimes and genocide linked to the Darfur conflict in the 2000s, but the military council has said it would not extradite him to The Hague.

In Khartoum, the clashes erupted as the protesters were expanding their sit-in area and setting up barricades made of burning tires and tree branches to block off major streets. The SPA said the road closures were in response to the military council's delay in handing over power to civilians. It has called for another march on Tuesday, and protest leaders have threatened a general strike and civil disobedience.

Taha Ossman Isaac, a negotiator for the Forces for the Declaration of Freedom and Change, which represents the protesters, said late Monday that the negotiations were “fruitful.”

Rabie said negotiations would resume later Tuesday on the makeup of a transitional sovereign council, Cabinet and legislative body, and on the duration of the transition. The protesters have called for a four-year transition overseen by a civilian-led government, while the military council has said it would rule the country for up to two years until elections can be held.

Earlier Monday, before the clashes broke out, footage circulating online showed men from the Rapid Support Forces forcibly dispersing protesters. The paramilitary force, which has led counterinsurgency campaigns in Darfur and other regions, is led by Gen. Mohamed Hamdan Dagalo, the deputy head of the military council.

The RSF said that “anti-revolution groups” were behind the violence late Monday.

The U.S. Embassy in Sudan, however, blamed the generals for the violence, saying it was “clearly the result of the Transitional Military Council trying to impose its will on the protesters by attempting to remove roadblocks.”

“The decision for security forces to escalate the use of force, including the unnecessary use of tear gas, led directly to the unacceptable violence later in the day that the TMC (the transitional military council) was unable to control,” it said in a statement.