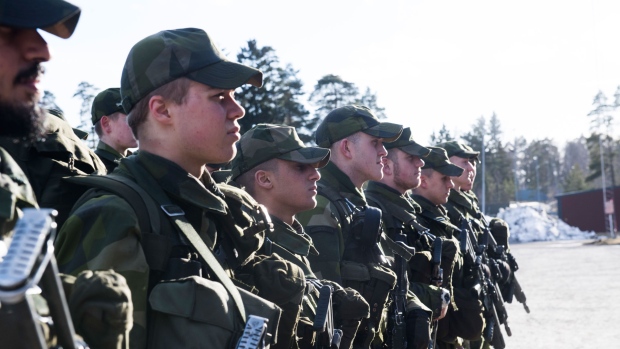 Young recruits during an inspection, Thursday, March 2, 2017 at the regiment in Enkoping 70 km north-west of Stockholm, Sweden. (Fredrik Sandberg /TT via AP)

COPENHAGEN - Sweden's left-leaning government instituted a military draft for both men and women Thursday because of what its defence minister called a deteriorating security environment in Europe and around Sweden.

Sweden abolished compulsory military service for men in 2010 because there were enough volunteers to meet its military needs. It has never had a military draft for women.

The government said “the all-volunteer recruitment hasn't provided the Armed Forces with enough trained personnel. The re-activating of conscription is needed for military readiness.”

In September, non-NATO-member Sweden stationed permanent troops on the Baltic Sea island of Gotland. Defence Minister Peter Hultqvist described the move as sending a signal after Russia's 2014 annexation of Crimea and its “increasing pressure” on the neighbouring Baltic states of Estonia, Latvia and Lithuania.

There have also been reports of airspace violations by Russia's military aircraft in the Baltics and a military buildup in the Russian exclave of Kaliningrad, which sits across the Baltic Sea from Sweden.

About 20,000 people now work for the Swedish armed forces, 84 per cent of them men and 16 per cent women, according to the forces' website. But the armed forces lack 1,000 active troops as well as 7,000 reservists, according to Sweden's coalition government of Social Democrats and Greens.

Under the plan approved Thursday, at least 4,000 18-year-olds could be called up each year. Swedes will still be able to volunteer for military service.

The Swedish government, which often has described itself as “feminist,” said “modern conscription is gender neutral and will include both women and men.”

Hultqvist said he had been inspired by neighbouring Norway, which in 2013 introduced a law applying military conscription to both sexes. That made Norway the first NATO member to draft both men and women, joining a tiny group of countries around the world, including Israel.

Conscription was introduced in Sweden in 1901, but had gradually wound down and was formally cancelled 109 years later. During the Cold War era, nearly 85 per cent of Swedish men were drafted into the army due to the nearby threat of the Soviet Union. The average term of service was around 11 months.

In 2015, Sweden's military expenditure dropped to 1.1 per cent of its gross domestic product, down from 2.5 per cent in 1991 as the Cold War came to an end, according to the Stockholm International Peace Research Institute.

On Tuesday, Micael Byden, head of Sweden's armed forces, said an additional 6.5 billion kronor ($718 million), or a 15 per cent budget boost, was needed to increase the country's military's capabilities in the coming years. This was to be added to the 45 billion kronor ($5 billion) the government had earmarked for 2017. 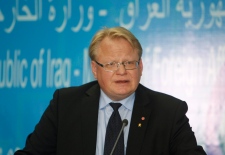