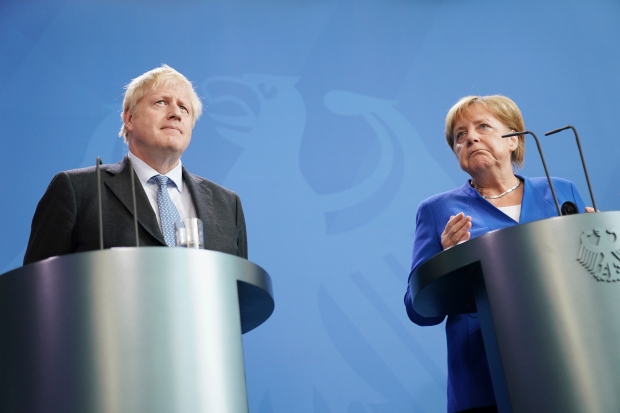 PARIS - Prime Minister Boris Johnson is likely to find little support for his drive to reopen Brexit negotiations when he meets with French President Emmanuel Macron on Thursday, the second stop on his first European tour as leader of the British government.

Johnson was buoyed Wednesday by German Chancellor Angela Merkel, who raised the possibility that a negotiated departure from the European Union may still be possible if Britain comes up with alternative plans for the Irish border within 30 days.

But Macron has already dampened expectations for his meeting with Johnson, saying renegotiating the Brexit deal is “not an option.”

Johnson is seeking concessions from the EU to win support in the British Parliament, which has already rejected three times the agreement negotiated by his predecessor.

“We must help the British deal with this internal democratic crisis, but we mustn't be hostage to it nor export it,” Macron told reporters on Wednesday, referring to the British government's struggle to honour the result of the 2016 referendum in which the country voted to leave the EU.

Johnson became prime minister last month when former Prime Minister Theresa May stepped down after failing to secure parliamentary approval for the withdrawal agreement she hammered out in more than two years of talks with EU leaders.

The primary sticking point is the so-called backstop, which would keep the U.K. closely aligned with the EU if the two sides can't find another way to prevent the return of border checks on the border between Northern Ireland and the Republic of Ireland.

The EU has twice delayed Britain's departure date, which is now scheduled for Oct. 31. Johnson says Britain will leave the EU on that date, with or without an agreement, raising concerns about economic damage on both sides of the English Channel.

Speaking alongside Johnson on Wednesday in Berlin, Merkel indicated that an agreement might yet be reached, but she said it was up to Britain to offer a solution to the contentious Irish border issue.

“(We) might be able to find (a solution) in the next 30 days, why not?” Merkel told reporters.

Her comments marked a departure from the pessimism that has prevailed on both sides in recent months. While the EU has ruled out renegotiating the Brexit agreement, Johnson says the backstop must be scrapped.

Johnson welcomed the “blistering timetable” Merkel suggested, but appeared to acknowledge that the ball was now in Britain's court to avert an economically devastating no-deal Brexit by proposing a viable solution to the Irish border issue.

“You rightly say the onus is on us to produce those solutions, those ideas, to show how we can address the issue of the Northern Irish border, and that is what we want to do,” he said.

The EU says the backstop is merely an insurance policy meant to avoid checkpoints between Northern Ireland and the Republic of Ireland, which were a flashpoint for sectarian violence in the past, and won't be needed if other solutions are found to regulate goods moving across the border.

But technological solutions have so far proved inadequate, and it is unclear what new proposals Johnson may offer.

Kirka reported from London. Frank Jordans in Berlin contributed to this report.