Some of the music world's biggest acts have been added to an already star-studded lineup of performers at the 2011 MuchMusic Video Awards.

MuchMusic announced Friday that chart-toppers Bruno Mars, the Black Keys, Avril Lavigne and City and Colour are scheduled to perform at the June 19 mega-event in Toronto.

"It's my first time doing all this stuff and I find it all very exciting," Mars said in a press release. "I hope all my fans in Canada enjoy my performance."

Joining them on stage at the MMVAs at 299 Queen St. W. will be Lady Gaga and co-host Selena Gomez.

Additional performers and presenters will be announced in the coming weeks. The full list of nominees is slated to be announced on MuchMusic's New.Music.Live program May 17.

The 2011 MMVAs will air live on MuchMusic in Canada and Fuse in the U.S. 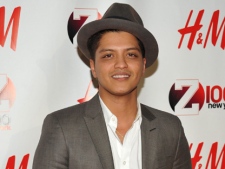