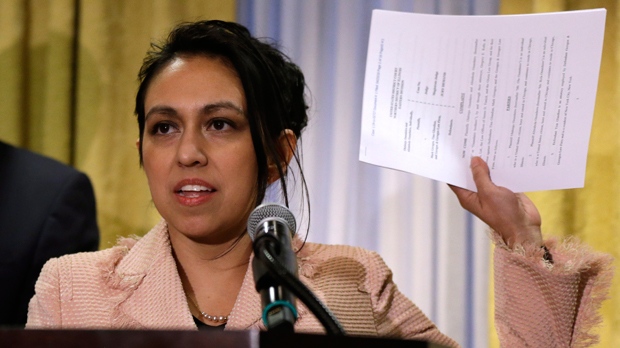 Gloria Schmidt, a lawyer for Olabinjo Osundairo and Abimbola Osundairo, who said they helped Jussie Smollett stage a racist and homophobic attack against himself, speaks during a news conference Tuesday, April 23, 2019, in Chicago. The brothers are suing the "Empire" actor's attorneys for defamation. The federal lawsuit names Mark Geragos and his law firm as defendants and that they continued to say publicly that the brothers "led a criminally homophobic, racist and violent attack against Mr. Smollett," even though they knew it wasn't true. (AP Photo/Kiichiro Sato)

CHICAGO -- Two brothers who say they helped Jussie Smollett stage a racist and homophobic attack against himself filed a lawsuit Tuesday against the “Empire” actor's attorneys, alleging that they repeatedly asserted publicly that the brothers carried out a real, bigoted attack on Smollett despite knowing that wasn't true.

A lawyer for Olabinjo Osundairo and Abimbola Osundairo filed the federal lawsuit on behalf of the brothers. It names Mark Geragos and his law firm as defendants.

The suit contends that even after police and prosecutors alleged that the Jan. 29 attack was staged and after all charges were dropped against Smollett, Geragos and his firm continued to say publicly in widely reported statements that the brothers “led a criminally homophobic, racist and violent attack against Mr. Smollett,” even though they knew that wasn't the case.

The lawsuit says that the lawyers' repeated statements that Smollett told the truth all along and that the brothers were lying caused them “significant emotional distress,” and made them feel unsafe and alienated them from the local community.

The brothers didn't appear at a news conference their attorneys held Tuesday, but they issued a statement, saying “We have sat back and watched lie after lie being fabricated about us in the media only so one big lie can continue to have life. These lies are destroying our character and reputation in our personal and professional lives.”

The lawsuit doesn't specify an exact amount of money the brothers are seeking, only that would it be more than $75,000 for “appropriate compensatory damages, punitive damages and costs” stemming from the alleged defamation.

“Same-sex sexual activity is illegal in Nigeria, which can result in 14 years of imprisonment,” the lawsuit says. “If the accused is married, the punishment is death by stoning.”

It also accuses Smollett of taking advantage of the brothers' own aspirations to establish TV and movie careers by manipulating them into taking part in the alleged hoax.

“In short, Mr. Smollett used his clout as a wealthy actor to influence Plaintiffs, who were in a subordinate relationship to him and were aspiring to 'make it' in Hollywood,” the lawsuit contends.

Police allege that Smollett paid the brothers to help him stage an attack in which he said two masked men beat him, hurled racist and homophobic slurs at him, doused him with a chemical substance and looped a rope around his neck.

Smollett, who is black and gay, maintains that the attack wasn't staged. In the weeks after the alleged attack police arrested the Osundairo brothers on suspicion of assaulting Smollett but released them without charges. A police spokesman said the two were no longer considered suspects and that investigators had new evidence after questioning them.

About a week after police questioned the brothers Smollett was charged with felony disorderly conduct and accused of making a false police report about the attack. The Cook County state's attorney's office abruptly dropped charges against Smollett in March. The city of Chicago has since sued Smollett seeking repayment for costs of investigating his case.