Use of celebrity memes in politics raises stakes for copyright owners 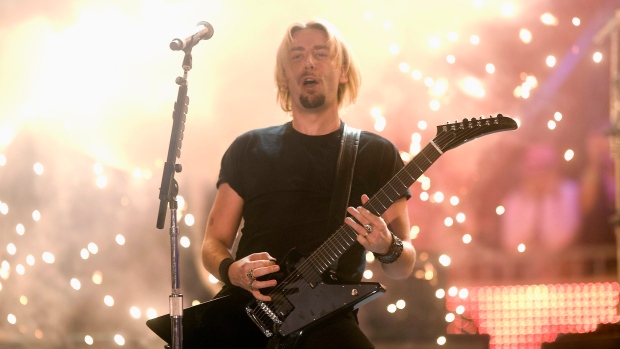 Chad Kroeger performs with Nickelback at the MuchMusic Video Awards in Toronto on Sunday June 21, 2009. Twitter and YouTube's decision to delete an edited clip of Nickelback posted in a political attack by Donald Trump came down to copyright complaints, but lawyers say the actions of the U.S. president may run afoul of other laws that protect singer Chad Kroeger's likeness from being used without his permission. THE CANADIAN PRESS/Nathan Denette

TORONTO - Twitter and YouTube's decision to delete an edited clip of Nickelback posted in a political attack by Donald Trump came down to copyright complaints, but lawyers say the actions of the U.S. president may run afoul of other laws that protect singer Chad Kroeger's likeness from being used without his permission.

It's a situation that's coming up more frequently as meme culture, once dismissed as a teenage phenomenon, becomes part of the daily conversation.

For years, footage of celebrities from TV awards shows, movies and music videos has been repurposed to comedic effect. But more recently, those famous faces have wound up being used for political purposes or social statements.

Many times those images fall under U.S. fair use laws - or similar laws called fair dealing in Canada - but as more public figures become part of memes that aren't authorized or contradict the person's own beliefs, some of them could fight back in the courts.

“We're seeing it all the time and it's becoming an issue in entertainment and in politics,” said Jennifer Davidson, an associate at law firm Deeth Williams Wall in Toronto.

“People are using the ability to protect their own likeness in order to make sure they are protecting their image.”

Whether Kroeger took exception to his image being used in a Trump tweet posted Wednesday isn't clear. Representatives for Nickelback in Canada did not respond to requests for comment.

And how Trump settled on Nickelback is also hazy, but the “Photograph” meme - which plays on the song's lyrics “Look at this photograph; every time I do it makes me laugh” - has a storied history in internet culture.

LOOK AT THIS PHOTOGRAPH! pic.twitter.com/QQYTqG4KTt

Similarly doctored footage of the band's 2005 music video has been recycled for nearly a decade as internet creators replaced the original photograph with a basket of cats, line graphs and many other humorous images.

But Trump's tweet carried a more serious tone, with Kroeger portrayed as clutching a framed photo of former vice-president Joe Biden, his son, a Ukrainian gas executive and another man. It was a reference to the president's unsubstantiated claims his Democratic rival dabbled in his son's overseas business deals.

A copyright claim was filed by Warner Music Group - owner of some of Nickelback's songs - under the U.S. Digital Millennium Copyright Act, according to the Lumen database. In response, Twitter and YouTube removed the video.

Within hours, Trump's personal lawyer Rudy Giuliani tweeted the video again, and it took several hours before the clip was removed from his feed under another copyright claim.

A publicist for Warner Music Canada declined to answer questions on the matter.

Davidson said in many cases a social media company will err on the side of caution by removing a video to protect themselves from potential litigation.

“When they do take down the offending image, they shield themselves from liability,” she said.

Enforcement of copyright violations largely relies on good faith, said Catherine Lovrics, a partner at Bereskin & Parr LLP in Toronto. Social media platforms assume when you're filing a claim, you actually hold the copyright and believe your rights have been violated.

“It's an honour system from that perspective,” she added.

The responsibility is largely put on the copyright holder who can become part of a whack-a-mole game, chasing down potential offenders as the content spreads online.

However, copyright holders also have the upper hand in determining which memes they believe violate their rights. Ultimately, if they feel a video doesn't fall under certain definitions protected under fair use laws, such as “parody,” social media companies are happy to remove it.

That explains why Trump's political tweet was pulled down, but other “Photograph” memes of Kroeger remain unchallenged on YouTube.

How meme culture is litigated in the courts is still mostly untested, but Davidson expects that to change.

Earlier this year, Pepe the Frog creator Matt Furie reached a settlement that forced conspiracy-driven website Infowars to pay him US$15,000 for turning his cartoon character into a meme adopted by right-wing as a hate symbol.

Part of the question in his case was over ownership of the character, but it could serve as a bellwether for future decisions.

Other instances of celebrity faces being dragged into political meme culture have been challenged outside the courts.

In January, Ontario's Progressive Conservatives used a meme of heartthrob Ryan Gosling, seemingly without his permission. An image of the actor saying “don't go,” taken from the film “Gangster Squad,” appeared on the party's website.

Some critics pointed out using the London, Ont.-born actor's likeness could lead to litigation, though Gosling's camp never publicly addressed the matter. The photo was pulled from the party's website a few days after it came under fire.

Meanwhile, Trump has a history of dabbling in meme culture, Lovrics said, most famously when he repurposed the “Game of Thrones” catchphrase “Winter is coming” for a post that threatened Iran with sanctions.

HBO responded with a joke squarely aimed at the show's fan base: “How do you say trademark misuse in Dothraki?”

But Lovrics says the stakes are somewhat different for Nickelback partly because it could be argued that people seeing the meme could perceive Kroeger as a supporter of Trump's position on Biden.

“You're Nickelback, whatever your political views may be, you may not want your song associated with this particular political cause or institution,” she said.

“This is a very stark issue, and to have your creative work brought in and leveraged for that does cross the line.”