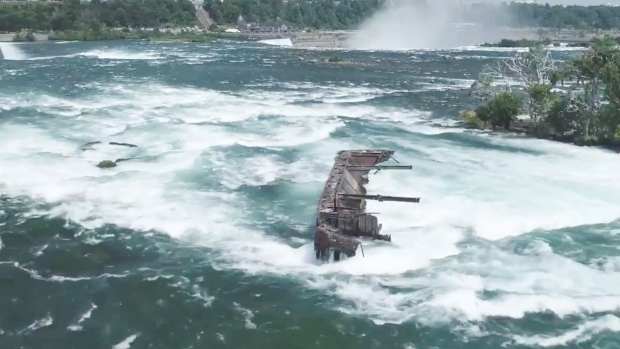 A 104-year-old shipwreck that sits near the brink of Niagara Falls has moved closer to the edge following bad weather this week.

In 1918, The Iron Scow broke loose from its tug boat and became grounded on the rocks about 600 metres from the Horseshoe Falls.

Two men were on the boat when it broke free, but were successfully rescued by emergency crews the following day.

For 101 years, the boat remained lodged in the rocks and didn’t move, but in 2019, a strong Halloween storm pushed it 50 metres closer to the brink.

It remained in that position, until this week when the boat moved again.

In a video posted to Twitter this week, Senior Manager of Heritage of Niagara Parks Jim Hill said the storm also appears to have broken the boat into three parts.

Officials did not not say how much closer The Iron Scow was pushed towards the brink.

The Iron Scow, the century-old shipwreck, moved closer to the Horseshoe Falls last weekend due to the weather. It last moved in 2019. The potential of it washing over the falls is not considered to be a public safety concern.

"We're seeing the continued deterioration of the scow," Hill said. "A good portion of it is already gone."

While the boat is getting closer to the brink of the falls, Niagara Parks says it washing over isn't "considered a public safety concern."

Hill said he believes the boat will continue to deteriorate piece-by-piece over the coming years.

"The scow has lived through decades of being pounded by the river and storms," Hill said. "Maybe it's just reaching the end of its life out there."