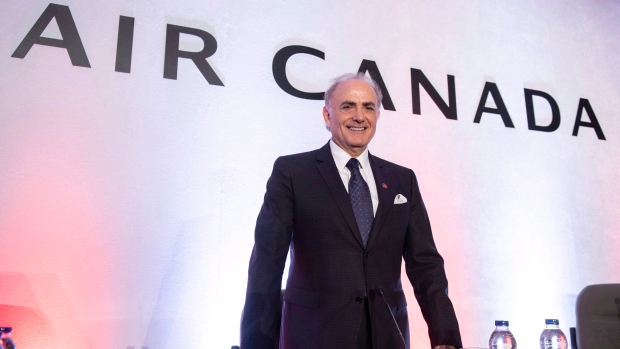 MONTREAL - Air Canada chief executive Calin Rovinescu will retire next year after leading the company for more than a decade, with the airline's longtime No. 2 set to inherit the role as the industry faces a once-in-a-generation crisis.

Rousseau, 61, has been deputy chief executive at the Montreal-based company since December 2018 and Air Canada's CFO since 2007.

Rovinescu, 65, has led the airline since 2009, when he came aboard as the Great Recession was taking a toll on the global travel market.

He has a long history with the airline: A longtime partner of Montreal's Stikeman Elliott law firm, Rovinescu worked with Air Canada as lead external counsel during its 1988 privatization and repulsed a hostile takeover bid for the airline from Onex Corp. in 1999.

He joined the company as head of strategy starting in 2000, graduating to chief restructuring officer during its spell in bankruptcy court in 2003 before leaving the next year to co-found investment bank Genuity Capital Markets.

He cemented his reputation as a skilled negotiator with the $497-million repurchase of Aeroplan last year - spun off from Air Canada in 2005 - and a renegotiated deal announced last week to buy rival Transat A.T. Inc. for $190 million rather than the original $720 million.

Air Canada shares would become the best performing stock on the Toronto Stock Exchange over his decade at the helm, returning more than 5,900 per cent through the end of 2019.

Rovinescu has been rewarded for his success, receiving $12.87 million in total compensation in 2019, though as of May 4 that figure had been halved thanks to a tanking stock price. He is also entitled to a nearly $800,000 annual pension, but agreed to waive his $1.4-million salary starting April 1, 2020, due to the pandemic.

As 2020 dawned, he sat atop the country's dominant airline, flush with profits and liquidity and a share price that topped $52, miles above the penny stock it was in 2009.

“Under Mr. Rovinescu's leadership, Air Canada rose to become one of the strongest network airlines globally and, until COVID-19, had exceptional share price performance to match,” Canaccord Genuity analyst Doug Taylor said in a note to investors.

What a difference a few months can make.

That state of affairs has been upended by the COVID-19 pandemic, which has devastated the global airline sector - Air Canada's passenger revenues dropped 95 per cent year over year in its second quarter. The loss of income prompted 20,000 layoffs - 53 per cent of its workforce - as the Montreal-based company burned through $19 million per day, with little improvement in the last few months.

The airline also faces continued frustration from thousands of customers after it cancelled their flights due to the coronavirus but offered few refunds, opting instead to compensate them with travel vouchers.

Canada's air industry continues to seek sector-specific relief from the federal government, which has instead pointed companies toward broader programs like the Canada Emergency Wage Subsidy.

The United States and some European countries have offered carriers billions in financial aid, with strings attached that include 20 per cent government ownership in the case of Lufthansa and emissions reduction commitments from Air France-KLM.

That said, the Rovinescu-era turnaround meant Air Canada had $7.4 billion in cash on hand before the outbreak, leaving it with a better liquidity position than any of the four biggest U.S. carriers.

He agreed to postpone his retirement until next year as the coronavirus battered the industry, an Air Canada spokeswoman said.

“That stickhandling of Air Canada through COVID-19 is nowhere near done,” said John Gradek, who heads McGill University's Global Aviation Leadership program. “The crisis is not over by a longshot.”

On the one hand, the CEO change is seen as a continuation of Rovinescu's leadership.

“The retirement of a leader with the record that Mr. Rovinescu has established would ordinarily be considered a negative. However, his successor, Mr. Rousseau, has been a key part of the aforementioned strategy,” Taylor said.

On the other hand, Rousseau has largely been a “back-office” player, Gradek said, despite his key role in securing $6 billion in liquidity this year.

“Calin's basically been the frontman at Air Canada for the past decade, so there hasn't been much of a chance for Rousseau to spread his wings,” said Gradek.

“The jury's still out whether he's got the ability to build the credibility that's needed to be the CEO of one of the largest airlines in the world.”

Rousseau is widely seen as playing an instrumental role in changing the company's financial trajectory by boosting its profit margin, share price and pension plan, which moved from a $3.7-billion deficit in 2013 to a $2.6-billion surplus in 2019.

Coming on board Air Canada on the cusp of the 2008-09 financial crisis, Rousseau honed his skills as CFO at Hudson's Bay Co. between 2001 and its $1.1-billion sale in 2006 to South Carolina billionaire businessman Jerry Zucker.

Before that Rousseau held senior financial posts at Moore Corporation, Silcorp Ltd. and United Cigar Stores Ltd., where he became CFO at the age of 30.