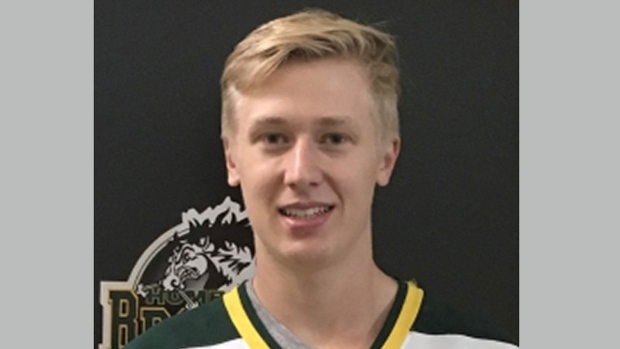 ST. ALBERT, Alta. -- Playing with mini-sticks in the basement is a common activity for many hockey-loving families.

For the Wack brothers, who grew up in St. Albert, Alta., it was a little different.

"I'd wear the goalie mask and a can," Justin Wack, 18, recalled in an interview with The Canadian Press. "He'd get a full-sized stick and I'd get a mini-stick. Then he'd have the bigger net and I'd have the smaller one.

"He would just wing slappers at me."

Justin, who's blind, said it actually worked quite well.

"I play hockey myself now and I'm a goalie."

Justin's big brother, Stephen, died in a crash between a semi-truck and the Humboldt Broncos team bus at a rural Saskatchewan intersection on April 6.

The Broncos were on their way to a playoff game and 16 people, including 10 players, would die in or after the collision.

Stephen Wack, who was 21, played junior hockey in Alberta with the Camrose Kodiaks and the Whitecourt Wolverines before moving to the Saskatchewan Junior Hockey League.

The six-foot-five defenceman spent the last two seasons playing with the Broncos.

"He was a very defensive, shut-down guy," said his brother. "Sometimes they'd have him play forward on a power play. He would stand in front of the goalie and he would drive guys nuts. He's a big guy."

Justin said he and his parents, Tricia and Alan Wack, drove to Saskatchewan to see Stephen play a couple of nights before he died.

When they heard the bus was in a crash, they immediately got back in the car to make the 700-kilometre drive from St. Albert again.

They only knew it was bad.

"I want to give a lot of credit to first responders," he said. "It was such a mess. They really, really did what they could.

"Sixteen people didn't make it, but there's still 13 kids who did."

The Wack family didn't know what had happened to Stephen, but they were worried because he wasn't answering their texts and calls.

He had died in the crash.

Justin said his brother had "so many qualities."

"He was really humble, really honest," he said. "He had a work ethic like no other. He just worked really, really hard. He never quit."

He made videos. He loved surfing and hanging out at the lake.

And he was close to his family.

"I went to a lot of his games as a kid," said Justin, who recalled one team when Stephen was nine or 10. "They got me to come into the dressing room, sit in a circle, gave me a team jacket and said, 'You're going to be our junior coach."'

Justin would hang out with the boys and talk with them before games.

"He kept me involved in his games. It was nice to go support him and also be a part of the team."

Stephen also pushed his little brother to be his best.

"Sometimes, being blind, people don't realize what you're capable of doing ... Stephen always let me do my own thing.

"If he knew I was capable of doing it myself, he wouldn't intervene."

He appreciated it -- even if it meant his brother was shooting pucks at him in the basement.

"We pushed each other. That was a big part of our relationship."

A service for Wack and teammates Logan Hunter, Jaxon Joseph and Parker Tobin is to be held Tuesday at Rogers Place in Edmonton.