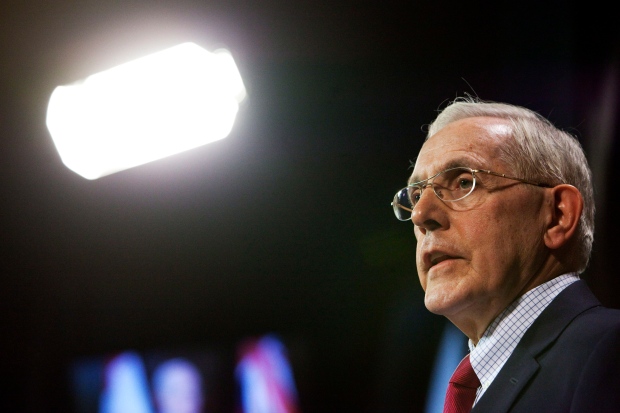 TORONTO -- The decision by Ontario's Liberals to cancel a gas plant in Oakville before the 2011 election will add little more than the price of a cup of coffee to the average household electricity bill, Energy Minister Bob Chiarelli said Thursday.

"It's less than a cup of Tim Horton's coffee a year," Chiarelli told reporters after the Ontario Power Authority presented its estimate on the impact of the cancelled gas plant to the legislature's justice committee, which is probing the issue.

The OPA, which estimated the hit on bills would be about $2.01 a year, based its calculations on a total cost of $635 million for the Oakville cancellation, but the province's auditor general warned it could be as much as $810 million.

The OPA also did not include $40 million in so-called sunk costs for the Oakville energy project that will be paid by Ontario taxpayers, not hydro ratepayers.

The impact of the cancelled plant on hydro bills is "minuscule" when spread over the 20-year life of electricity contracts and divided among 4.4 million residential customers, added Chiarelli.

However, Progressive Conservative energy critic Lisa MacLeod disputed the $2 figure, and asked to have all supporting documents on the consumer impact of the Oakville project and another cancelled gas plant in Mississauga handed over to the justice committee within six weeks.

"The OPA and Bob Chiarelli and (Premier) Kathleen Wynne also told us the cancelled gas plants were only $40 million, so I really don't believe them," said MacLeod. "I found it troubling that the minister will not commit to handing over that rate impact, which tells me that they're hiding something."

Chiarelli said the Opposition simply doesn't like the fact the impact on bills from the gas plants will be minimal.

MacLeod called Chiarelli "insensitive" for his cup of coffee analogy when Ontario residents are already paying among the highest prices in Canada for electricity.

"I think it's little solace to somebody who's paying $400 a month for their hydro bill to have Bob Chiarelli say 'Don't worry. I'm just gonna put another cup of coffee on that bill,"' said MacLeod. "I think it's outrageous, and we're going to get to the bottom of it because he can't continue to hide those numbers."

The auditor general estimated the cost of the Liberals' decisions to cancel the Oakville generating station and scrap the partially-built gas plant in neighbouring Mississauga at up to $1.1 billion.

The opposition parties called it an "expensive Liberal seat-saver program," and launched contempt motions against the government and initiated public hearings at the justice committee that have been going on since February.

Earlier Thursday, OPA chair Jim Hinds told the committee he feared the developer of the Oakville gas plant, TransCanada Enterprises, took advantage of the fact the office of former premier Dalton McGuinty wanted a quick deal to avoid a lawsuit over the broken contract.

"TransCanada was claiming to our people certain things that the government was saying about the breach, the relocation (of the plant to Napanee), all kinds of things," said Hinds, who met with officials from McGuinty's office to discuss the situation.

The committee has already heard testimony that a promise from McGuinty's office to make TCE "whole" on the cancelled contract weakened the OPA's negotiating position with the giant energy company.

On Monday, Chiarelli released a long-term energy plan that forecast electricity rates in Ontario will climb 33 per cent over the next three years as the province pays to refurbish existing nuclear reactors and contracts for more wind power.