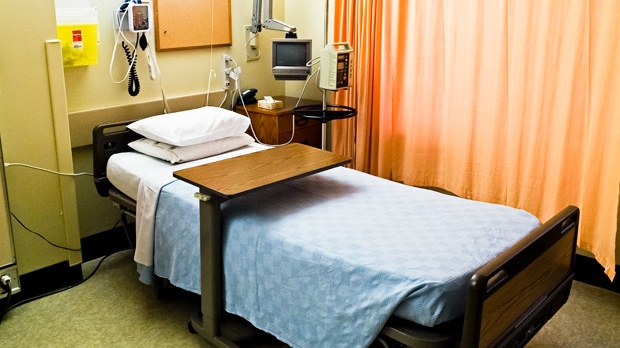 An empty hospital bed is seen in an undated file photo. (The Canadian Press Images/Bayne Stanley)

To deal with a surge in COVID-19 patients in Ontario hospitals, the Ford government announced plans Monday to create hundreds of new intensive care and high intensity medicine beds in the province’s virus hot spots.

Thirty-five of those critical care beds are set to open at Cortellucci Vaughan Hospital when it officially opens on Feb. 7.

The province has not said exactly where the additional 465 beds will go or when they will be open for patients.

“The reality is we don’t have months to wait for these beds to come online because this is a serious capacity challenge that our hospitals in Ontario are experiencing right now,” Ontario Health Minister Christine Elliott said during Monday’s news conference.

“Even today, we have people who are being transferred from hospitals in Toronto to Kingston and to Niagara so this is not something that can continue for a longer period of time.”

Elliott said the province will look at creating beds in unused spaces of already existing hospitals.

“Spaces that have not been used for beds for a period of time, we want to open beds up there because the premises are already there and they have the facilities to be able to open critical care beds,” she added.

“We are also looking at creating step down units for people that don’t need to be in a critical care bed. They can be at a step lower. We can create those in other hospitals.’

She said hospitals that do other work, for example rehabilitation hospitals, could also be used to create critical care beds.

“We are looking everywhere that we can within the entire system, particularly in the hot spots to create those beds,” she said.

Altaf Stationwala, president and CEO of Mackenzie Health, said further capacity could also be found at Cortellucci Vaughan Hospital, which will be used exclusively to ease capacity pressures at surrounding hospitals by taking in critical care patients from other facilities.

“We have been in discussions with the federal government for two field hospitals as well to be able to move people who might not need to be in a critical care bed to be in another location, so there is a lot of shifting and movement that needs to happen,” she told reporters.

“They (the field hospitals) are coming online. We are working with the federation government to get them operational. That shouldn’t take very long to happen at all because we know the need is great.”

“That is why we are looking at redeploying trained staff from other hospitals in non-COVID related areas into the hot spots,” she said. “So we need all hands on deck.”

On Monday, Dr. Eileen de Villa, Toronto’s medical officer of health, warned that the city’s intensive care units could run out of space by the end of January as community transmission of the virus continues to surge.

A Critical Care Services Ontario (CCSO) report obtained by CP24 on Monday indicates that there are 416 COVID-19 patients in intensive care units across Ontario, representing nearly a quarter of all ICU occupancy provincewide.

There are currently about 2,100 total ICU beds in the province and the number of patients in the ICU is now approximately 1,774, according to the CCSO report.

As of midnight, there are a combined 90 ICU beds still available at Toronto hospitals, though about a quarter of that excess capacity is at the Hospital for Sick Children.