Here's what to expect from Monday's Ontario leaders debate 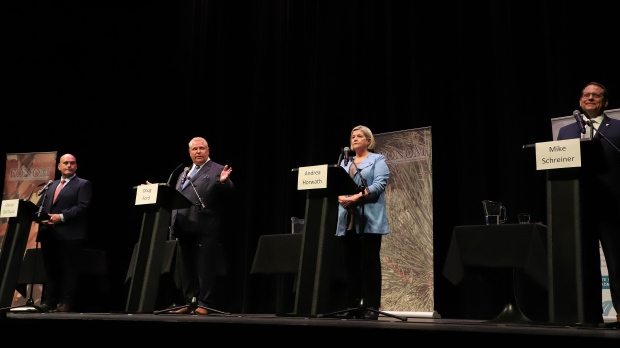 The leaders' schedules won't show it, but between now and Monday afternoon, each party will set aside time to prepare its leader for the Ontario election campaign TV debate on Monday evening.

Each party will have reviewed the tape from Tuesday's leader debate in North Bay, looking for lessons and performance tips for the leader. The afternoon debate was not carried by all the channels in Ontario, so the stakes were relatively low. For Monday, there will be rehearsals, including role-playing with stand-ins playing the role of the other leaders. The leaders will practice their attack lines and, as one insider put it to me, "war game it out."

One debate prepper pointed out that an important part of a successful debate performance is to come off as the most comfortable, confident leader on the stage.

The parties know the format, and they can guess the topics and predict the questions. Each party will have a strategy.

I expect the Progressive Conservatives will want to keep its leader, Doug Ford, doing what he does best. As one Tory told me, they should let viewers see his "heart and let that come through." The Tories go into the debate ahead in the polls, and in those same polls, Ford is the leader most trusted to be premier. Ford is an excellent communicator and you can count on him to stick to his core message with the positive vibe of saying "yes" and the promise to "get the job done."

After the North Bay debate, the Tories will probably have Ford keep up the attacks on Liberal Leader Steven Del Duca and the NDP's Andrea Horwath. Ford will clump them together when possible and single them out depending on the issue. Ford needs to keep sowing doubt about the leadership abilities of his opponents.

There are multiple challenges for the Liberals. Their leader, Steven Del Duca, is still largely unknown, and it is his first big TV debate. He will need to put the party's core message across. Del Duca has to sell voters that there is a reason to vote for change. And then Del Duca must show that he has the plan to deliver that change. The Liberals do not have a sharp line that sums up the reason for Ontario to change governments and vote for Del Duca.

Del Duca also has to find a way to call out Ford's record as Premier. It will be interesting to see if Del Duca can knock Ford off his script. Ford will deflect, ignore and move off-topic if it is in his interest. The challenge for Del Duca is to try and put a dent in Ford's folksy "can do" message.

This is Andrea Horwath's fourth debate as leader of the NDP. Ontario knows her and many of her platform initiatives are updates on what the party ran on in the last election. The NDP pitch to Ontarians is that only Horwath can defeat Ford. It will be interesting to watch how Horwath makes that case in the TV debate.

We've heard Horwath's "attack" lines. She mentions Ford's "rich buddies" as often as possible. Del Duca will also be a target for Horwath. The polls have the Liberals in second place, but Del Duca is running third as the best leader for premier behind Horwath. So expect Horwath to paint Del Duca as a Liberal no different than past Ontario Liberals.

The Green Party's Mike Schreiner has an ambitious platform to talk about. The Greens only hold his seat, but for the first time, Schreiner is included in the TV debate. He has nothing to lose and everything to gain from a strong performance. The reality of the format is that the party with one seat gets the same "facetime" as the party that won a majority in 2018.

Some political strategists question the importance of the TV debate. Unlike the federal election TV debate, this one runs through the dinner hour (6:30 – 8:00) and is not in primetime. Many of those taking the time to watch have already decided, and the debate merely reinforces that choice.

Most strategists think the media coverage after the debate is more important than the debate itself. The debate and the headlines it produces might move the dial on the June 2 election.