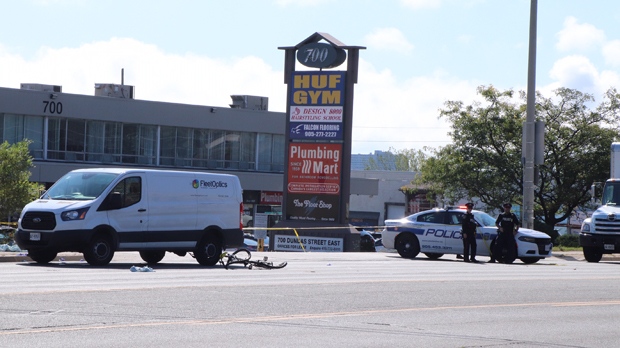 A delivery van and a damaged bicycle are seen in Mississauga after a serious crash on Oct. 9, 2019. (Ted Brooks/CTV News Toronto)

A man is in critical condition after he was struck and pinned beneath a car for a period of time while riding a bike in Mississauga on Wednesday morning.

Peel Regional Police say they were called to Dundas Street East and Cawthra Road at 11:42 a.m. for a report of a collision.

Officers said they arrived to find an adult male cyclist stuck beneath a vehicle.

Paramedics said he was eventually removed and rushed to a hospital trauma centre in critical condition.

Police said the major collision bureau would investigate the crash and that the driver involved remained at the scene.

The intersection was closed to allow for an investigation.