Police have identified 18-year-old Rueshad Grant as the teen who died after he ended up under a parade float taking part in the Scotiabank Toronto Caribbean Carnival parade Saturday.

The Mississauga man was on the float - believed to be a semi-truck hauling a flatbed trailer loaded with people – and got off at some point, police said. He was run over as the vehicle travelled west along Lake Shore Boulevard West, near Dowling Avenue, at about 8:50 p.m.

Police said the man was rushed to hospital, where he was pronounced dead.

Police said Sunday it still wasn’t clear at what point or how he got off the float before he was struck.

The incident occurred in front of a large crowd near the end of the grand parade route.

The float was moving at a very slow speed when Rueshad was run over, and it continued on for about 500 metres before it stopped, police told CP24 reporter Jackie Crandles.

A video posted on YouTube purports to show the moments after the incident. In the video, an emcee aboard a float and people in the crowd are heard shouting at the driver to stop the truck.

Seconds later, the emcee is heard asking people to stay away from the tractor-trailer’s tires, and then amid the confusion tells the crowd that the man’s foot was run over.

According to a description posted with the video, people initially thought that only the man’s foot was run over, and the crowd did not immediately realize how serious the incident was.

Meanwhile, organizers and the title sponsor of the three-week festival are offering their condolence to the Rueshad’s family and friends.

In separate statements, carnival organizers and Scotiabank described it as a tragic incident.

"We are deeply saddened by this loss," said Denise Herrera-Jackson, CEO of the event’s festival management committee, in a written statement. "The Toronto police are conducting a full and thorough investigation and we will assist them in any way we can."

Speaking with CP24 Sunday, carnival CAO Chris Alexander offered his condolences to Rueshad’s family and said the event is safe.

“This is an accident. You know what accidents are – you don’t plan for them,” Alexander said. “It’s a great parade and it’s very safe in terms of all the planning that we do to ensure that it’s good for the patrons and also for the participants.”

An autopsy was scheduled to begin Sunday, as police continue to investigate the incident. No one has been charged.

Police said they have interviewed the truck driver and a number of witnesses, but they still want to hear from people who witnessed the incident and haven't given a statement to investigators.

Rueshad Grant is pictured in this photo shared by his sister on Twitter on August 4, 2013. The teen was killed Aug. 3 when he was run over by a float taking part in the Scotiabank Toronto Caribbean Carnival grand parade. (@Tika_Gotti /Twitter) 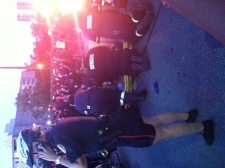 Paramedics and police tend to a man after he was struck by a Scotiabank Toronto Caribbean Carnival grand parade float Saturday, Aug. 3, 2013. (Kisha H. / MyBreakingNews)