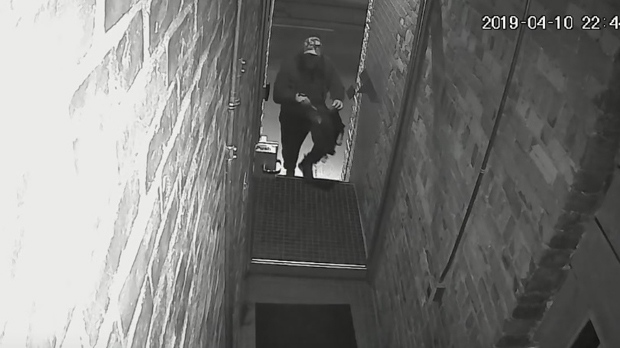 A man wanted in numerous break and enters is shown in a screengrab image from April 10, 2019. (TPS)

Toronto police have released surveillance camera footage of a man wanted for numerous commercial break-ins across the downtown Toronto area dating back to 2016.

Police say the suspect targets older buildings and businesses that use Apple computers.

He usually forces doors open with a crowbar and is generally active each year between the months of April and December.

He is described as six-feet to six-feet-two inches tall, weighing 220 to 240 pounds, clean shaven with short brown hair.

“He dresses well and blends in with regular crowds,” police said in a news release issued Sunday. “He is agile and stands out due to his size.

A nine-second clip of the suspect in action was released Sunday night.