Motorcyclist taken to hospital after collision in Wexford 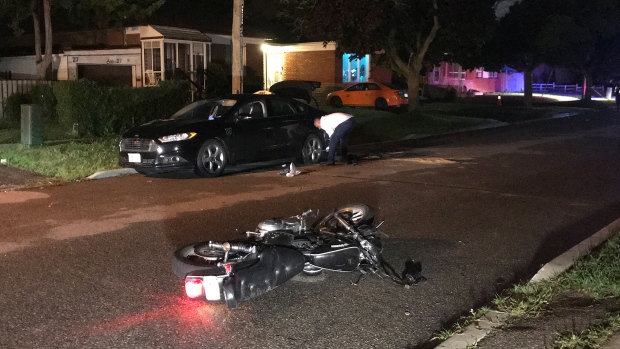 The scene of a collision involving a motorcyclist is pictured on Goldsmith Avenue, near Pharmacy Avenue Sunday August 9, 2020. (Michael Nguyen /CP24)

A male motorcyclist has been taken to hospital after he ended up underneath another vehicle in a collision in Scarborough’s Wexford neighbourhood.

It happened on Goldsmith Avenue, near Pharmacy Avenue at around 10:40 p.m. Sunday night.

Toronto police said the motorcyclist ended up underneath the other vehicle after the two made contact and he had to be extricated.

The extent of his injuries is not yet known.

The intersection is expected to be shut down for some time as police investigate.