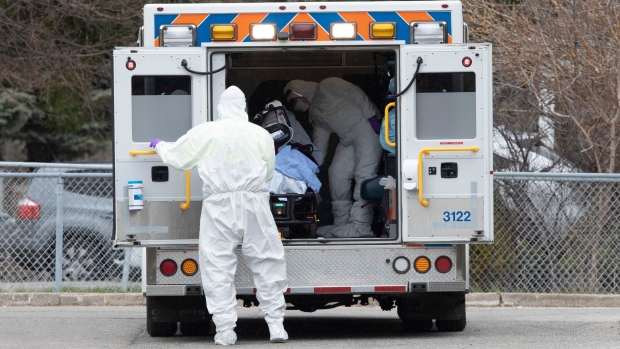 The provincial government has expanded its temporary “pandemic pay” to a number of other frontline workers, including paramedics.

The announcement comes just days after Premier Doug Ford announced that about 350,000 healthcare workers in the province would receive a $4 an hour pay bump for the next 16 weeks along with a monthly lump sum payment of $250 in recognition of the important work they are doing during the COVID-19 pandemic.

The move was widely applauded by concerns soon surfaced about a number of groups who had been left off the list of eligible workers, including paramedics.

In a statement issued on Tuesday night the Ontario Public Service Employees Union (OPSEU) announced that the Ford government has now agreed to expand the program to paramedics, respiratory therapists, public health nurses and all addictions and mental health workers in a congregate setting who serve the same functions as their counterparts in workers in acute-care hospital settings.

“As soon as the original plan was made public, my office was in touch with government officials lobbying hard for additions to the eligibility list and while today’s expansion is not everything we asked for, I applaud the government for listening and moving the yardsticks,” OPSEU President Warren (Smokey) Thomas said in the statement. “We will continue to work to ensure all employers remain focused on ensuring front-line workers’ jobs are protected and that they have the requisite safety equipment.”

Treasury Board President Peter Bethlenfalvy has previously estimated that an average worker putting in at least 40 hours per week will earn about $3,560 more over the next four months due to the “pandemic pay” increase.

“We just want to focus on the 350,000 people that have direct contact with COVID patients. Those people, and I have said it before, they are underpaid. This is just a small token of our appreciation that we can show,” Ford said on Tuesday afternoon. “We are so, so grateful for the hard work that the healthcare workers and other people involved in taking care of COVID patients are doing. They are going in there day after day after day even though they are exhausted and putting their lives in jeopardy.”