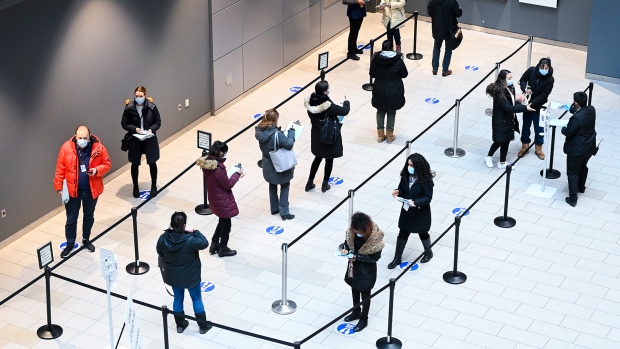 Health-care workers wait in line at a UHN COVID-19 vaccine clinic in Toronto on Thursday, January 7, 2021. THE CANADIAN PRESS/Nathan Denette

The head of Ontario’s COVID-19 vaccination task force says hospitals gave some doses to non-frontline staff, even people who work from home, because it was better to do that than to let the doses expire, and it may continue to happen.

Ret. Gen. Rick Hiller said Wednesday that in some cases, when long-term care home workers couldn’t make it to hospital vaccination sites in late December and early January, and the Pfizer vaccine vials were already open and hours away from expiry, other workers who are not involved in patient care were selected to get the doses instead.

“It’s not ideal, an operation of this size is not going to be and we are not going to apologize for that because we want to vaccinate folks in an incredible hurry,” he told reporters.

In southwestern Ontario, a hospital network administered doses of vaccine to its executive team, some of whom are able to work from home.

Revelations that workers who work in hospitals but do not provide care received precious COVID-19 vaccines prompted one senior Toronto physician to call the situation “a gong-show.”

“In some cases some who were probably further down the queue – as you articulated, got vaccinated before others,” Hillier told a CTV News reporter.

“Each site has been working to ensure that happens in as small number as possible but it will continue to occur when you’re vaccinating 165,000 people to millions of people.”

Provincial officials speaking on background called those moves individual decisions made in local settings, saying they stressed to each hospital network the ethics involved in administering doses, and that they should be given only to those at the highest risk.

They said each site with vaccines was given an ethical framework and a risk form matrix, but may have ignored those in some instances to simply get doses of vaccine out and into people’s arms.

“Speed trumps perfection,” Hillier said. “We want to get those done as fast as we can.”

Federal guidelines instructed healthcare centres to give vaccines only to healthcare workers “whose work involves direct contact with patients.”

Liberal MPP John Fraser released a letter Wednesday demanding the province explain the deviations from guidelines when the first vaccines were released.

“This week, there have been troubling reports that hospital administrative, non-frontline staff and in some cases, employees working from home are receiving the COVID-19 vaccination ahead of Ontario’s most vulnerable residents living in long-term care and the staff that are caring for them,” Fraser said.

“Allowing this to happen contradicts your government’s COVID-19 ethical framework, developed in partnership with the COVID-19 Vaccine Distribution Task Force, to prioritize vaccination implementation during Phase One to Ontario’s vulnerable populations and those who care for them.”

Meanwhile, the province’s vaccine distribution task force says they hope to have administered at least one dose of a COVID-19 vaccine to every single resident and worker in an Ontario long-term care home by Feb. 15.

They have now administered 150,000 doses of vaccine, and more than 8,000 people have completed the full two-dose regimen for inoculation.

They say they could boost daily dose rates to 38,000 per day by Feb. 1 and even several times that if given notice, but they are constrained by supply.

"We’re only in about 2nd or 3rd gear and we have 24 more gears to go," Hillier said. "We are running flat out to ensure we have more capacity than the vaccines we have."

They expect to receive 2.3 million doses of the BioN-Tech/Pifzer and Moderna vaccines up to March 31.

On Wednesday Premier Ford and Prime Minister Justin Trudeau spoke on the phone about the rollout of vaccines, with Ford reiterating “the fact that Ontario has the ability to administer more vaccines than it has supply and plans to further ramp up capacity in the coming weeks and months,” according to his office.

They hope to continue to vaccinate healthcare workers, people living in remote First Nations communities, adults living at home with chronic conditions requiring regular care and residents of retirement homes during this time.

After that time, they hope to enter Phase 2, which greatly expands vaccine eligibility.

Officials listed five groups who will be eligible for the COVID-19 vaccine in Phase 2 of their distribution plan.

Those who will be able to get the vaccine include:

Officials provided a few examples of essential workers, including first responders, teachers, and members of the food and construction industry, but said that work still needs to be done to sub-prioritize this category.

The government anticipates Phase 3 to begin in August. Under this phase, “remaining eligible Ontarians” will be able to get the COVID-19 vaccine.

In a bid to stretch existing supplies, federal scientists have said the second dose of any vaccination can be extended up to six weeks from when the first dose was administered.