Thousands of people march against Islamophobia in downtown Toronto

Thousands of people marched through downtown Toronto as part of a demonstration against Islamophobia Saturday.

The protesters were calling on the Canadian government to make an “immediate, public condemnation” of an executive order by U.S. President Donald Trump that banned citizens from seven predominantly Muslim countries from entering the U.S.

They also called for the suspension of the Canada-U.S. Safe Third Country Agreement, which requires asylum seekers to apply for refugee status in the first safe country they arrive in.

Trump's travel ban was temporarily suspended Friday following a ruling by U.S. District Judge James Robart; however in a message posted to Twitter on Saturday, Trump predicted that that decision would be overturned.

Despite the uncertainty about whether the ban would ultimately be overturned or not, protesters said they have plenty of reason to be out in the streets.

“This is all about love and not hate,” protest organizer Walied Khogali told CP24 on Saturday. “We want our neighbours and we want our community neighbours to start getting civically engaged in the work that needs to be done to fight Islamophobia and the rise of white supremacy. Our community is traumatized. Many people don’t feel safe and the bigoted politics of President Trump by banning Muslim identified human beings, we need to stand up to that.”

The march began at around 2 p.m. and lasted several hours.

Speaking with CP24 along the route, NDP MPP Jagmeet Singh said that the turnout is impressive but what happens next is what really matters.

“We need to do more than just than saying we oppose Islamophobia,” he said. “We need to actually act towards creating a more inclusive society and we need policies to back it up. We can do so much more.”

More than 150 organizations participated in today’s protest, which was held in concert with a number of similar marches in locations across Canada.

University Avenue was closed in both directions between Queen Street and Dundas Street due to the march, but has since reopened. TTC streetcars were also diverting away from Dundas Street for a period of time, however regular service has resumed. 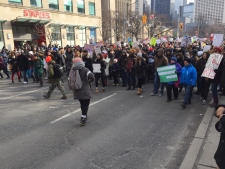 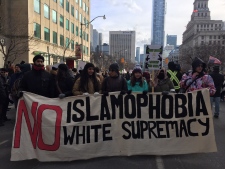 Demonstrators participate in a march against Islamophobia on University Avenue on Saturday. (Arda Zakarian)

Demonstrators protesting the U.S. Muslim immigration ban march in front of the U.S. consulate in Toronto on Saturday Feb. 4, 2017. THE CANADIAN PRESS/Frank Gunn

Protesters are seen outside the U.S. Consulate on University Avenue on Feb. 4.