Toronto has spent $224 million on transit projects that could be changed by the province: Report 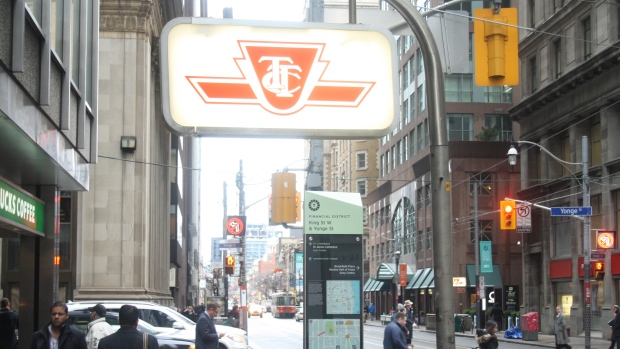 A TTC subway sign is shown in this file photo. (Chris Fox/CP24.com)

A new report by city staff says Toronto has spent around $224 million over the last few years on planning for priority transit projects, some of which are now in question due to changes being contemplated by the province for the city’s transit system.

The report provides city council with an update on the 2016 transit network plan, designed to reduce the strain on the city’s crowded subway system and says that some of those projects are now at a “critical” juncture in their development.

According to the report, prepared in consultation with TTC CEO Rick Leary, several of those projects are currently ready or will be ready by the end of 2020 to move to the procurement and construction phase. Those projects include SmartTrack Stations, the Scarborough subway extension, the Exhibition Loop-Dufferin Loop Streetcar Connection (part of the Waterfront TransitNetwork Plan), and the downtown relief line.

The report comes a week after Premier Doug Ford threw a bomb in the transit file, saying that the province had a different view of transit projects in Toronto as part of ongoing discussions about a provincial upload of the city’s subway system.

Letters sent to the city by provincial officials indicated that the province would like to look at using unspecified alternative technologies to build the relief line, add two more stops onto the Scarborough subway extension, shift a significant portion of the Eglinton LRT project underground, and fast-track the Yonge North subway extension.

The proposed changes have thrown into question the cost and timing of the affected projects and the province has yet to fill in the blanks on many of the specifics of how the changes would work.

According to the city staff report released Wednesday, the province and Metrolinx have shared “limited information” about the changes to date.

“Changes in direction, be it in scope, technology, project delivery or funding create uncertainty and risk,” the report says. “These risks have the potential for delays in the delivery of much-needed public infrastructure and additional costs. The risks are not confined to financial consequences but also relate to reputational risks in public confidence in government.”

City staff say further discussions with the province are required in order to understand the possible impact of the provincial changes to the transit network plan.

Speaking about the report at Bloor-Yonge Station Wednesday, Mayor John Tory said he is opposed to any changes that would delay the delivery of planned transit infrastructure.

“Any proposed changes to our plan risk delaying already overdue transit expansion in the city,” Tory said. “That is why I’m so committed to seeing that we move ahead and do so in a way that does not cause delay. We owe it to every resident in the City of Toronto to get on with building transit and to, now at the stage that some of these projects are at, to actually get construction underway.

Numbers in the report confirm that the estimated cost of the one-stop Scarborough subway extension has risen to $3.9 billion, compared to the $3.56 billion approved for Scarborough transit by city council in 2013. The city is responsible for cost overruns on the project. City staff say the extra $327 million will be made up through recoverable debt, with the debt service costs accounted for through higher-than-expected development charges, lower borrowing costs and interest from the Scarborough Subway Extension tax levy.

Among the recommendations in the report, city staff suggest that the city manager report back to council on the operational impacts to the TTC associated with changing the scope and/or delivery of the Scarborough subway.

Downtown Relief Line estimated at $7.2B

The report also includes a cost estimate for the downtown relief line. According to the report, the cost is currently pegged at $7.2 billion. However staff note that number is an early estimate and the actual cost could potentially be as much as double that amount.

Federal infrastructure funding is expected to account for $3.15 billion of the project cost.

More detailed design work for the relief line is expected to be complete by the first quarter of 2020, along with a more accurate cost estimate.

In its overview of the city’s transit landscape, the report notes that Torontonians rely more heavily on transit than any of their surrounding municipal neighbours.

“There is a strong reliance on the transit network in Toronto, with approximately 46 per cent of trips in the downtown and 28 per cent of all trips citywide made by transit,” the report says.

By comparison, just four to eight per cent of trips are made using transit in Hamilton and in the regions of Durham, York, Peel and Halton.

“An expanded, connected transit network is central to the city being able to respond to current growth and development, and to plan for the expected 500,000+ new residents of Toronto over the coming decades,” the report notes.

The city’s executive committees expected to meet next week to consider the report.