Toronto Islands closed until July 31 due to flooding, high water 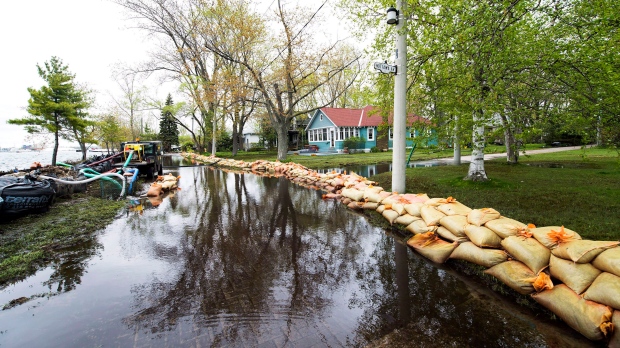 Sandbags keep water from flooding the land more as the Toronto Islands are threatened by rising water levels in the spring of 2017. (Nathan Denette/The Canadian Press)

The closure of flood-ravaged Toronto Islands has been extended until July 31 due to flood conditions and high water levels, affecting hundreds of event permits and summer camp program participants, city officials announced Wednesday.

Toronto Islands have taken a beating with ongoing deluges of rain and higher than normal lake levels since the beginning of April, submerging more than 50 per cent of the parkland under water, the city's manager of Water Front Parks James Dann told CP24 last week. This includes its three beaches – Hanlan’s Point, Gibraltar Point and Centre Island.

In the last two months, the area has been bombarded by showers – receiving more than 236 millimetres of rain, which is nearly 60 per cent above average, according to CP24’s meteorologist Bill Coulter.

Earlier this month, the city suspended public access to the island (with the exception of its 700 residents), suspending regular ferry service to Centre Island and Hanlan’s Point until June 30.

Toronto District School Board relocated its 240 students from Island Public School and the Natural Science School to the mainland mid-May. For the remainder of the school year, their classes are taking place at Nelson Mandela Park Public School in Trefann Court.

These decisions were made after weeks of relentless rains causing Lake Ontario to swell to dangerous levels.

The combination of the islands’ low elevation, heavy rains and wind-blown waves off Lake Ontario continue to submerge the city park, according to the Toronto and Region Conservation Authority’s waterfront specialist Nancy Gaffney.

Crews with the Toronto and Region Conservation Authority have been working overtime this month to offload 500,000 litres of water from the island each hour, using nine industrial pumps to help levels recede.

More than 40,000 sandbags have been placed along the shorelines to mitigate rising waters. Waterlogged roads across the island are also closed to residents due to their dangerous conditions.

The closure means Centreville amusement park, celebrating its 50th anniversary this year, remains closed as well as dozens of other permitted events.

The city estimates more than 300 event permits, issued to over 90 applicants have already been revoked due to flooding.

City-run recreation program registrants are also scrambling to find other summer activities. Summer camps on the islands have been postponed for another month, affecting roughly 350 kids.

Water levels on Lake Ontario are expected to keep rising for several weeks, whether or not more rainfall is expected, the city said.

“It will take several weeks or more for water levels to subside,” the city said in a written statement.

City crews are still stationed on the island and are continuing to tackle ongoing flood concerns.

"They’re monitoring the conditions very closely," city spokesperson Wynna Brown said. "We do know that lake levels are very high this year so we’re keeping a close eye over there."

Last week the agency responsible for monitoring water levels, International Lake Ontario-St. Lawrence River Board, reported that Lake Ontario was 84 centimetres higher than normal. This is the highest it has been since record levels were reported in 1952, the agency said.

All city-run recreation programs on the islands are cancelled through to the end of July, impacting roughly 350 summer camp registrants, the city said. (City of Toronto)