Mayor John Tory said Wednesday that he is “encouraged” by indications that the provincial and federal governments will come to the table to discuss help for Canada’s municipalities and in particular for Toronto, which is staring down a best-case loss of $1.5 billion this year due to the COVID-19 pandemic.

“I am very encouraged by Premier Ford’s comments today. He acknowledged that the TTC and municipalities are going to need the provinces’ support and the province is going to be there at the table,” Tory told reporters Wednesday.

A report released this week projects that the TTC alone will lose hundreds of millions of dollars by Labour Day and could be short on cash to continue operating.

Speaking at a news conference earlier in the day, Ford called the dire financial situation cities face “concerning” and said the province plans on coming to the table to help.

“We’re looking at that,” Ford said. “I had a meeting this morning with our team. I also had an in-depth conversation with the Minister of Municipal Affairs. They’re gonna need our support and we’re going to be there, we’re going to be at the table. But we can’t do it alone; we need the federal government to support us. It’s just too big of a ticket.”

The comments are the strongest indication so far that the province will provide some sort of relief for municipalities, which are reeling financially due to the crisis.

“I’m sure we’ll be mentioning this on our weekly call with the other premiers as well because it’s very concerning,” Ford said. “But we will be at the table for the municipalities. To what degree? We’ll have to wait and see what the federal government comes up with because it’s going to be a big, big ticket.” 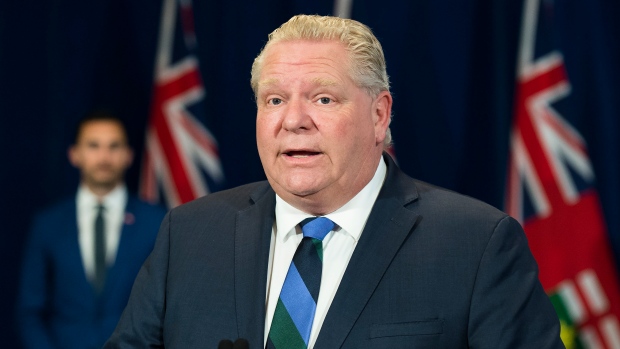 Prime Minister Justin Trudeau said Wednesday that he knows that transit will be part of the recovery and indicated that Ottawa will help in some way, although there were no specifics.

“We know that public transit and getting people to work is going to be an important part of our economy moving forward, but we also know that the challenges posed by social distancing and much greater working from home has come and affected our transit system significantly,” Trudeau said. “So we’re going to have to adjust and the federal government will be there to work with the provinces, including supporting them in their areas of jurisdiction.

In Canada, cities fall under the jurisdiction of provinces, but Ford has indicated that the province cannot bolster its cash-strapped municipalities alone.

Tory acknowledged Wednesday that “the ask is going to be substantial,” but reiterated that Ottawa and Queen’s Park are in a much better position to help.

For weeks he has been calling on the province and the federal government to come to the aid of cities, which by law in Ontario, are not allowed to run deficits. City revenues from transit, parking and other services have plummeted because of the pandemic, raising question about how long key services can continue without assistance.

The city also allowed a two-month grace period for property taxes, which ends this week. Tory said yesterday that the city “simply cannot afford”’ to extend that grace period any further.

He has pointed out that cities are shouldering many of the frontline costs of dealing with the pandemic, such as funding local public health units, and he has called for municipalities to receive a share of sales taxes, income taxes and corporate taxes that flow to the federal and provincial governments.

“The city in fact gets none of this money and that is why I’m pushing so hard right now to make sure the provincial and federal governments come forward with support for Toronto and municipalities right across Ontario and right across Canada,” Tory said. 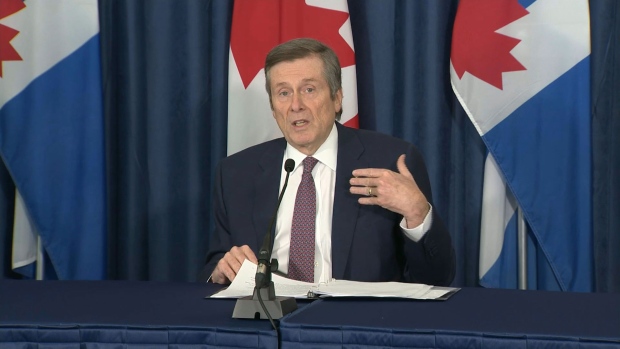 Tory said he’s spent days talking to federal ministers, MPs, and provincial officials to press the urgency of the municipalities’ needs and said that the comments from Ford and Trudeau are “a good step forward.”

“Now it means we can get down to talking turkey and getting some money to offset those problems which will mean that it won’t be as acute a problem, though it will still be a challengefor us for years to come,” he said.

Tory announced Wednesday that while support from higher levels of government is key, the city is moving ahead with a plan to raise cash for key projects by issuing “social bonds.”

“We expect to issue up to $100 million in social bonds this year,” he said.

He said investor demand for the bonds will lead to a lower interest cost for the city.

“These investments of course then bring about positive change in our communities,” Tory said.

According to a release from the city, Toronto is the first municipality in Canada to establish a social debenture program.