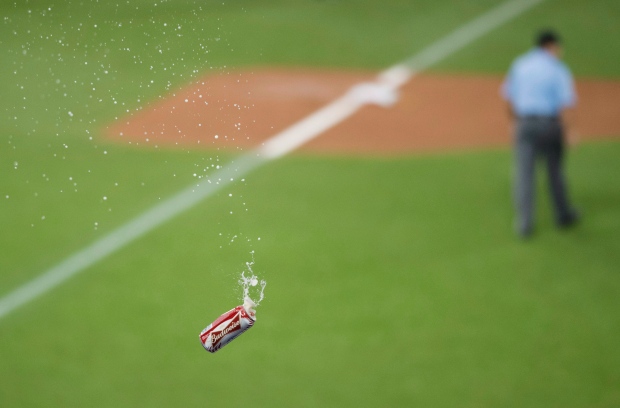 A beer is thrown onto the field toward the umpire crew during seventh inning game five American League Division Series baseball action between the Toronto Blue Jays and the Texas Rangers in Toronto on October 14, 2015. The team says, due to the debris-tossing incident on Oct. 14, beer sold in the upper tier of the stadium will not be available in cans during Game 3 of the American League Championship series. THE CANADIAN PRESS/Darren Calabrese

TORONTO - Blue Jays fans sitting in the 500 level of Rogers Centre for tonight's playoff game against Kansas City will have to settle for drinking their favourite tipple out of a plastic cup.

The team says beer sold in the upper tier of the stadium will not be available in cans during Game 3 of the American League Championship series.

The decision comes after some unruly fans threw debris on the field, including beer cans, after a controversial call went against the Jays in Toronto's game against Texas on Wednesday.

One man, 33-year-old Albert Grummitt, was arrested and charged with mischief after a baby was hit by the spray of a thrown beer. He has since been released and is due in court on Nov. 24.

The Jays eventually won the game 6-3 to win their American League Division Series in five games.

After the incident, Major League Baseball said it would discuss "comprehensive security plans" for the remaining post-season games in Toronto.