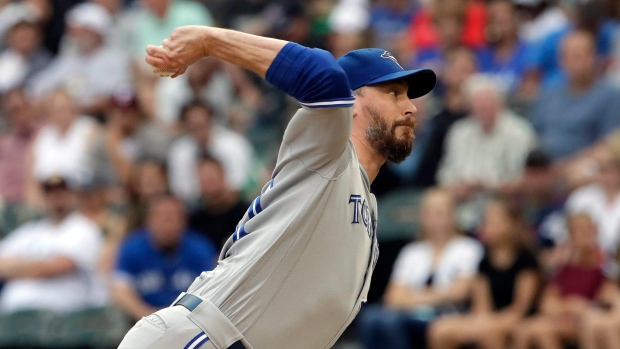 DUNEDIN, Fla. -- John Axford doesn't mind that he'll likely be the oldest pitcher on the Blue Jays roster this season.

He's comfortable in more of a mentorship and leadership role, anyway.

The 35-year-old right-hander, who signed a minor league deal with Toronto on Saturday, reported to Blue Jays camp that morning, stepping into a clubhouse that had taken on a much more youthful appearance than the one he left when he was traded in July.

"There's a lot of new faces in there that I haven't seen in a while, or I haven't seen (at all)," Axford said. "Looking at the roster, I'm seeing that I might be the oldest potentially on that list. ... So to be able to talk to some of those young guys, maybe I can instill some of the things I learned when I was a kid."

Axford credited LaTroy Hawkins, who he pitched with in Colorado, and Trevor Hoffman, his former teammate in Milwaukee, as veterans that he looked up to earlier in his own career.

Axford, a native of Port Dover, Ont., also signed a minor league deal late with Toronto last year -- just before camp opened -- and went 4-1 with a 4.41 ERA in 45 games with the Blue Jays before being traded to the Los Angeles Dodgers on July 31.

He didn't do very well in the five appearances he made with the Dodgers over the last two months of the season -- a stint that also saw him fracture his fibula when he was hit by a comebacker -- allowing eight runs (seven earned) over 3 2/3 innings.

Still, Axford didn't quite expect to sign so late this time around.

"Last year I expected that because I had a terrible 2017. I was released in July and I didn't pitch in August and September so that was expected for me personally," he said. "But this year coming in and having pitched a full season, I missed part of the year with the fractured fibula, but I don't think I expected it to be as late as it was this year.

"But it seems to be a sign of the times of the way things are rolling and we'll see how the trend continues."

The towering right-hander said he had some offers from other teams, with those also coming late into the off-season, but he wanted to return to Toronto so he could live at home in nearby Burlington, Ont., and spend time with his two sons JB and Jameson like he did last year.

Axford spoke with Blue Jays president Mark Shapiro and general manager Ross Atkins at the Baseball Canada banquet last month in Toronto, letting them know how much he wanted to come back.

"For me it's home," he said. "Spending as much time as I did with family and friends and my kids was perfect and ideal and it was really a dream last year. So I wanted to get back in that situation."