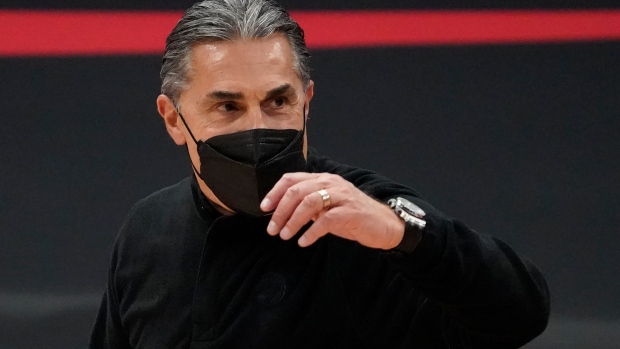 Toronto Raptors assistant coach Sergio Scariolo calls a play against the Detroit Pistons during the second half of an NBA basketball game Wednesday, March 3, 2021, in Tampa, Fla. Scariolo is filling for head coach Nick Nurse, who was out for the league's COVID protocol. (AP Photo/Chris O'Meara)

The Raptors general manager watched from the locker-room.

Cases of a sinister coronavirus were climbing in California. The Raptors had just played in Sacramento and San Francisco. The unknown hung like a dark cloud.

“There was already a heightened awareness and the NBA had sent out a bunch of information. I remember being on that trip and just everyone being cautious,” Webster said. “There weren't masks yet, but we definitely had stopped congregating, we didn't have as many group meetings, everyone was washing their hands every second, we weren't really going out in public. There was very much a directive of: if you don't need to be there, don't go.”

March 11, 2020 will go down as the day that changed everything. The World Health Organization declared COVID-19 a global pandemic. Actor Tom Hanks announced he and wife Rita Wilson had tested positive.

And moments before Utah was scheduled to tip off against the Thunder in Oklahoma City, Jazz centre Rudy Gobert tested positive. The NBA immediately shuttered. The in-game announcer in Oklahoma City sent puzzled fans home with reassurances that “we're all safe.”

Norman Powell and a handful of other Raptors were at a charity bowling event that night, while other Raptors and staff were at coach Nick Nurse's foundation launch. Before the night was over, anxious Raptors players and staff - who'd been in Utah two nights earlier to face the Jazz - were driving to Toronto's Sunnybrook Hospital to be tested.

“Just sitting here talking with you, I remember it vividly, probably because my adrenalin was pretty high,” Webster said. “Obviously, there was a ton of concern coming from staff and players. Can I get tested? Do I have it? What does it mean?

“We didn't, as a world, really know how fast it could be transmitted. There were some tense moments.”

The Raptors went into a 14-day quarantine, and wouldn't return to the court for more than three months - eventually finishing out the season and playoffs in a bubble with no fans at Walt Disney World near Orlando.

“I remember a big part of our conversation with everyone was: Don't let your mind run wild with all the 'if' scenarios, literally you'll drive yourself crazy,” Webster said. “It was just trying to focus on what we control.”

The NBA's season suspension, which lasted 114 days, was the first major domino to fall, and within 24 hours every major North American league had screeched to a halt. Virtually every other global league and major sports event would follow suit.

NHL commissioner Gary Bettman cited shared locker-rooms with NBA teams as part of his decision to suspend play on March 12.

The Ottawa Senators were in California on a three-game road trip, playing the league's final game against the Los Angeles Kings a night earlier. A week later, the Senators announced the NHL's first positive test, and eventually had several, along with broadcaster Gord Wilson.

“It's hard to believe it's been a year,” said Senators coach D.J. Smith.

The Senators weren't part of the NHL's 24-team post-season restart in bubbles in Toronto and Edmonton, and so wouldn't play another game until mid-January.

“It's pretty wild,” said Ottawa centre Colin White. “Any time you go out west, it's pretty exciting as a team. Being in Ottawa all winter, the warm weather is nice. (But) it was a pretty crazy time there starting to hear about COVID.”

The Senators were in the L.A. locker-room when they got word the NBA had shut down.

“We were all like 'Are we playing tonight or not?”' White said. “And then in warm-ups both teams were looking at each other. It was a pretty wild sequence. Little do we know, we find out the next day that we're done. We never knew we'd be off for that long.”

The Toronto Maple Leafs had just arrived home from a California road trip themselves. They hosted Tampa on March 10, with new health restrictions that included banning media from the locker-room.

“Everything was a bit eerie because we didn't really know what was going on,” said Leafs centre Auston Matthews.

The NBA's pause a night earlier was the first time “it really felt real in terms of its ability to affect our schedule,” said Leafs coach Sheldon Keefe. “(March 11) was a strange night and then a very strange morning the next day. We didn't know if we were going to play that game â€¦ and then everything that went on beyond was a great deal of uncertainty for everybody.”

As the global sports world was going dark, reality was sinking in that the 2020 Tokyo Olympics might not happen.

“It became clear to the Olympic movement at some point that it was not in the best interest of the world to go forward on the original dates of Tokyo,” said Canada's two-time trampoline champion Rosie MacLennan. “But it's interesting sitting back and thinking about it a year later.”

On March 22, after a lengthy conference call with the athletes commission, senior leadership and medical staff, the Canadian Olympic and Paralympic Committees announced they wouldn't send teams to Tokyo unless they were pushed back.

“Just looking at the data that we saw from not only our government, but also the World Health Organization, and the projections, and the uncertainty around the virus spread â€¦ it wasn't anything to do with not wanting to participate, it was really just a focus on trying to protect our athletes, trying to protect our communities and trying to do our part,” said MacLennan, chair of the athletes commission.

“It was clear that there didn't seem to be a feasible way that the Games would go forward.”

Canada was among an early chorus of critics around the International Olympic Committee's early response to the Games, and two days later the IOC announced the Games were postponed a year.

Winter athletes, meanwhile, lost some of their biggest events. Canadian-based world championships in figure skating, women's hockey and women's curling were among those pulled off the schedule early in the pandemic.

Almost a year to the day Gobert's positive test sent the Raptors on late-night drives to Sunnybrook, and after months of effectively dodging the pandemic, COVID-19 caught up to Canada's NBA team last week.

Because of positive tests and contact tracing, the Raptors, who are playing home games in Tampa, Fla., due to Canada's border restrictions and Ontario health protocols, didn't have the required eight players for a Feb. 28 game versus Chicago, and the contest was postponed. It was the 30th postponement this season league-wide.

“Florida is a hotbed for COVID. The fact that they've been able to avoid it to this point is actually probably a good testament of things rather than a bad testament,” said Dr. Zain Chagla, an infectious disease expert with McMaster University in Hamilton.

Chagla, a Raptors fan, had tickets to a game the week after the league shutdown.

“I think back in March with that Rudy Gobert moment, I remember watching that game, and that moment when things were in trouble very quickly, right?” he said. “When that NBA game shut down, it was like, oh God, the world is going to shut down now.”

Three dozen NHL games have also been impacted this year by COVID-19, all in the U.S. The seven Canadian teams are all in one division and not crossing the border.

“What's been happening outside of the arenas in Canada has probably given us a lot more success in running the (North Division) in the NHL,” Chagla said. “Rates are much lower in Canada, there's been some degree of restriction most places where the NHL is playing, and so between the players and their contacts at home, there's less opportunities to get COVID.”

The Tokyo Olympics are set to open July 23 and the Paralympics, Aug. 24. Athletes, coaches and officials aren't required to have vaccinations to attend.

“It's doable, but it's a lot of work,” Chagla said. “I think realistically, punting it down the road when vaccines are much more available and much more of the population in the world is immunized â€¦ (would have) provided another layer of safety.”

While the NBA bubble last summer in Florida was a huge success, it wasn't sustainable. The NBA is feeling the full weight of COVID this season, similar to other leagues trying to operate outside bubbles.

“It's a bit tougher now, right? This is real life,” Chagla said.

There's an element of calculated risk now, he said.

In Canada, the return to high-level sports has been much slower. Most Canadian pro teams outside the NHL have had to make temporary homes in the U.S. to keep playing. The RBC Canadian Open golf tournament was the first major summer sports event in Canada to be cancelled for a second year in a row this week and Formula 1 and IndyCar races in Montreal and Toronto also could be in jeopardy. The CFL hopes to return in 2021 after cancelling its 2020 season.

Back south of the border, Webster feels like calculated risk is mathematical for how the Raptors and the NBA are operating.

“We're not doing this by percentages,” he said. “The NBA would say we have really great testing. We have a lot of information on severity and when people are infectious and how it transmits.

- With files from Joshua Clipperton in Toronto.

This report by The Canadian Press was first published March 10, 2021.