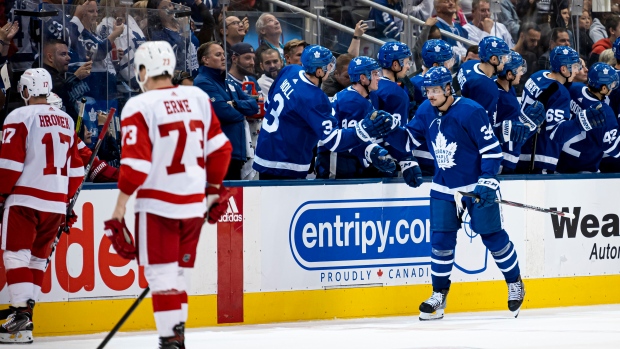 TORONTO - Auston Matthews had a goal and two assists and Frederik Andersen made 16 saves as the Toronto Maple Leafs defeated Detroit Red Wings 5-0 in final pre-season game for both teams on Saturday.

Matthews finished the pre-season with five goals and three assists in four games.

The power play underwent significant changes when Paul McFarland was named an assistant coach in May. The Leafs scored three power-play goals against the Red Wings. All of them occurred in the second period.

Detroit's Jimmy Howard made 23 saves on 28 shots in two periods of work. Filip Larsson played the final 20 minutes in goal for Detroit.

The Maple Leafs opened the scoring in the first period when Matthews recovered a turnover committed by Dylan Larkin in the Red Wings zone. Matthews found Andreas Johnsson on the ensuing 2-on-1 and beat Howard for a 1-0 lead at 0:29.

Toronto controlled the pace for the opening 20 minutes and outshot Detroit 13-5.

The Maple Leafs added to their lead in the second period by taking advantage of another turnover.

With Jake Muzzin in the penalty box, Trevor Moore intercepted a pass from Mike Green and went two-thirds the length of the ice on a breakaway. He deked out Howard for an unassisted short-handed goal for a 2-0 lead at 6:01.

Toronto made it 3-0 when William Nylander scored on a wrist shot from the right circle for a power-play goal at 8:45. The Red Wings challenged the goal for offside. The call on the ice was upheld and Detroit was given a bench minor for the unsuccessful challenge.

On the ensuing power-play, Matthews scored his fifth goal of the pre-season to give Toronto a 4-0 lead at 9:50. The Leafs got their third power-play goal of the period when Matthews deked around Danny DeKeyser while going to the net.

Matthews would then pass the puck with his backhand to John Tavares, who was parked in front of the net to bury the puck past Howard at 16:34.

Matthews is facing a charge of disorderly conduct and disruptive behaviour stemming from an alleged incident in May in his hometown of Scottsdale, Ariz.

None of the allegations have been proven in court and the player was not arrested.

The game was a final tuneup for both teams before the regular season gets underway. The Maple Leafs and Red Wings iced lineups that could resemble their regular-season rosters.

Toronto opens the regular season against the Ottawa Senators on Wednesday night.

This report by The Canadian Press was first published Sept. 28, 2019.