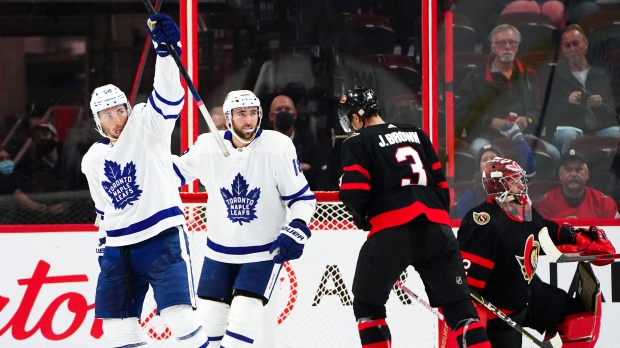 Petr Mrazek wasn't overly busy and stopped all 19 shots he faced in the Toronto net.

The Leafs iced a rather innocuous lineup but gave the Senators a challenge. Ottawa - who had a number of veterans playing - seemed to lack any kind of intensity and were flat for much of the game.

Bunting scored his third of the night in the final 90 seconds of the game.

Toronto was 3-for-8 on the power play.

Ottawa was 0-for-5 with the man advantage as they struggled to create any momentum.

His first came off a nice pass from Ho-Sang, and just over two minutes later, he picked up his second of the night as he tipped in Rasmus Sandin's point shot.

The Leafs opened the scoring in the 13 minute of the first period as Kampf was able to redirect a shot to beat Gustavsson. It was a tough break for the Ottawa netminder as he had just made two nice saves.

Ottawa will be back in action Friday night as they play the first of a home-and-home series with the Montreal Canadiens.

Notes: Zach Stanford, acquired Saturday in the trade with the St. Louis Blues for Logan Brown, made his Senators debut Wednesday night. â€¦ The Senators signed forward Zack Ostapchuk, drafted 39 overall in 2021, to a three-year, entry-level contract earlier on Wednesday.