TFC continue to try to clinch playoff berth, take on LA Galaxy next 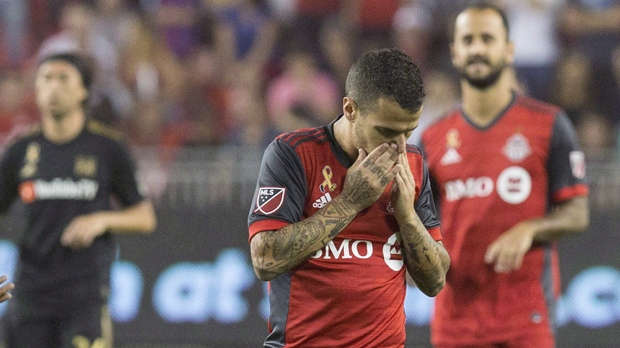 In welcoming the Los Angeles Galaxy to BMO Field on Saturday, Toronto FC is opening the door to a team almost as desperate as it is. Toronto FC forward Sebastian Giovinco (10) reacts during his team's 4-2 defeat to Los Angeles FC in MLS action in Toronto on Saturday September 1, 2018. THE CANADIAN PRESS/Chris Young

TORONTO -- There have been plenty of excuses for Toronto FC's poor play this season, from the gruelling early-season demands of the CONCACAF Champion League to the string of injuries that followed.

But the bottom line is far simpler.

“At the end of the day, I've said it over the past couple of months, it just hasn't been good enough at times,” veteran defender Drew Moor said of the TFC showing. “We've given up too many goals, (be it from) lack of concentration or whatever it is.

“You can point to a lot of things. But it's been a tough year. You just kind of shake your head.”

Nine points out of the playoffs with seven games remaining, Toronto hosts the Los Angeles Galaxy on Saturday night in the latest in a line of must-win games that it has so far failed to win.

A Toronto loss or draw coupled with a Montreal victory in Philadelphia could effectively sound the death knell for the defending MLS champions' playoff hopes. Rubbing salt into the TFC wound is the fact that the surging Seattle Sounders (12-9-5), whom they beat in last year's MLS Cup, are going after a ninth straight win.

In recent days, thanks to a no-holds-barred post-game analysis from captain Michael Bradley last time out, Toronto's mentality has come under scrutiny. Unlike last year's championship run when TFC found ways to win games, this team has found ways to lose this year.

The latest example was Sept. 1 in a 4-2 loss to visiting Los Angeles FC. Toronto, after losing possession, coughed up a freak double-deflection goal to go behind 1-0 and then conceded two goals in three minutes early in the second half to dig itself a 3-0 hole.

“We didn't come out in the second half with the belief, in my mind, that we could go and still win the game which we had every right to still believe,” said Moor.

“Probably the mentality was lacking at the start of that second half ... You can't wait to get punched in the mouth to have a good mentality,” he added. “It has to be from the start.

“The mentality is always there. It just needs to be stronger right now.”

Last year, TFC was a confident front-runner. It was 19-1-2 when scoring the first goal and 1-4-5 when conceding the first score.

“That's ridiculous and it speaks to a mentality that in too many cases is too fragile,” Bradley said of the team's inability to win when giving up the first goal.

Defence has let the champions down. Toronto, which conceded just 37 goals in 34 games during last season's championship run, has yielded 52 goals in 27 games already.

There will be plenty of offence on the field Saturday in a series that has a high-scoring history.

The winning team has scored three or more goals in three of the last four meetings between the two, with Toronto winning 4-0 at StubHub Center last September.

TFC and L.A., meanwhile, have conceded 106 goals between them this season.

And they have given up goals in bunches. The Galaxy have conceded three or more goals nine times in league play this season while Toronto has done so seven times.

The Galaxy - winless in six games (0-3-3) during which they were outscored 18-8 - parted ways with head coach Sigi Schmid this week. Interim coach Dominic Kinnear will lead the team Saturday.

“It's a cup final,” Moor said of Saturday's showdown. “We have to treat it as that, just do everything we can to win a game ... I'm feeling confident that we'll go out and do what we have to do to get the three points. Because anything less is not going to be good enough.”

TFC has to get past New England, D.C. United and Montreal to secure the sixth and last playoff spot in the East.

The good news for eighth-place Los Angeles (10-10-8) is that it is only three points out of the playoffs in the Western Conference.

Ibrahimovic says he's ready to shoulder the pressure to make the playoffs.

“Pressure we like. I love pressure,” Ibrahimovic told reporters in Los Angeles. “I'll take (my teammates) pressure and put it on me so they don't need to feel pressure.”

LAST MEETING AT BMO FIELD: Toronto won 1-0 in June 2017, snapping a 10-game Galaxy undefeated streak in the series dating back to May 2008.