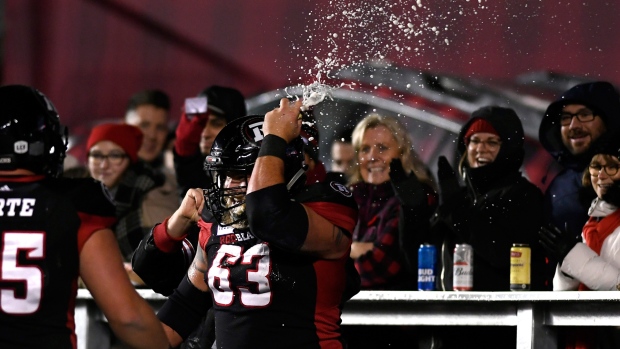 Ottawa Redblacks offensive lineman Jon Gott (63) smashes a beer can on his helmet after chugging it, as he celebrates his team's touchdown against the Toronto Argonauts during second half CFL football action in Ottawa on Friday, Nov. 2, 2018. THE CANADIAN PRESS/Justin Tang

While the Ottawa Redblacks offensive lineman wasn't fined by the league after grabbing a beer from his girlfriend and chugging it last Friday night in the aftermath of a touchdown against the Toronto Argos, the league revised its celebration policy on Monday.

“When a player celebrated a touchdown this weekend by drinking a fan's beer, he was acting within that policy and no discipline was mandated,” the statement says.

“However, the situation prompted several discussions with our clubs which indicated concern there is a risk that repeated celebrations featuring alcohol, or for that matter drugs, could send the wrong signal about our players, especially to young and impressionable fans.

“To put it simply, to have this happen once may, for many people at least, have been fun and even funny. But to have it happen again and again, and possibly include other substances, was not in the best interests of the CFL or the communities it calls home.”

Gott's celebration, which ended with him crushing the can against his helmet, was a social-media hit. It was picked up by ESPN and has been retweeted more than 22,000 times.

The CFL's celebration policy has now been reworked twice this year.

In August, the CFL allowed the use of props in celebrations after one player - Edmonton receiver Duke Williams - was penalized for climbing through end-zone signage and another - Winnipeg receiver Darvin Adams - was not for grabbing an on-field television camera and filming his teammates.