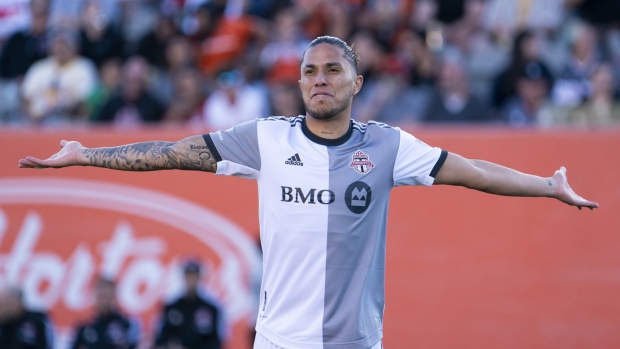 Toronto FC saw another designated player move on Tuesday, with star centre back Carlos Salcedo returning to Mexico reportedly to join FC Juarez. Salcedo complains after a call during first half of the 2020 Canadian Championship Final soccer against the Forge FC in Hamilton, Ont. on Saturday, June 4, 2022. THE CANADIAN PRESS/Peter Power

Toronto said it was a mutual agreement to terminate Salcedo's contract.

Salcedo, who was the highest-paid defender in Major League Soccer at US$2.35 million this season, has had one foot out the door for a while.

Toronto coach Bob Bradley said the Mexican was dealing with a family matter, without elaborating. The 28-year-old Salcedo has been shuttling back to Mexico where his wife gave birth last month to their second child.

“We'd like to thank Carlos for his efforts during a difficult time,” Toronto president Bill Manning said in a statement Tuesday. “In the end, Carlos felt it was most important to return to Mexico to be with his wife and children. We fully support Carlos' decision and wish him the best in the future.”

Salcedo is expected to resurface with FC Juarez, which currently stands fourth in the Liga MX standings at 1-0-1.

Looking to bolster a defence that gave up a franchise-worst 66 goals last season, Toronto acquired Salcedo from Mexico's Tigres UANL in late January.

Coincidentally Soteldo reportedly is also on the move from Tigres, possibly to Greece.

Italian star Lorenzo Insigne, whose TFC debut has been delayed by a calf injury, is the only DP currently on Toronto's books although the club is believed to be pursuing out-of-contract Juventus winger Federico Bernardeschi

Toronto had hoped that the Mexican international, who signed through 2024 with a 2025 option, could become the team's defensive linchpin. With 48 caps for Mexico, knowledge of MLS and experience outside Mexico with Fiorentina in Italy and Eintracht Frankfurt in Germany, Salcedo seemed an ideal candidate.

“Carlos is one of the top defenders in the CONCACAF region and will immediately improve our backline as we build for 2022 and beyond,” Manning said when Salcedo was signed.

Nicknamed El Titan for his strength in the air, Salcedo arrived with star power. The tattooed Mexican with the discreet ponytail has with 938,000 followers on Instagram and 363,700 on Twitter and likes to tease the with cryptic posts.

“Thanks to the team for understanding the health situation of my family and making everything easy for me to be with my them â€¦ All the best to everyone this rest of the season and THANKS for (teaching) me how to overcome from bad times â€¦ Toronto will always be in my heart!”

Earlier Tuesday he tweeted in Spanish “What number would you choose?' above the numbers 13, 14, 25, 30, 34 and 35. Salcedo wore No. 3 with Toronto. That number belongs to centre back Alejandro Arribas as Juarez.

Salcedo left MLS for Mexico in 2015, joining Chivas Guadalajara for two seasons before heading to Europe. He returned to Mexico with Tigres in 2019.

Toronto fans did not get to see much of him this season. He made 16 appearances for TFC in all competitions, including 13 league outings.

Salcedo, who started the season opener against FC Dallas next to French-born Congolese international Chris Mavinga, was suspended for a game by the league for serious foul play in Week 2 against the York Red Bulls.

He earned another ban for a red card April 9 against Real Salt Lake for catching a player with a high boot.

Fans only saw flashes of Salcedo's skills at the back. Like Mavinga, he tended to dive in, making for some tense risk-reward moments.

While TFC's defensive woes can't be laid at the feet of the Mexican, leaking goals continues to be a problem.

Toronto ranks 26th in the 28-team league in conceding 1.89 goal a game. TFC has yet to post a shutout in league play this season, a trend that dates back to last season. Toronto's last clean sheet came last September in a 0-0 draw at Colorado.

Toronto has conceded a goal or more in 27 consecutive MLS matches, one shy of equalling the fourth-longest regular season streak in league history (set by Vancouver 2018-19 and Miami Fusion 1998-99).

Internationally, Salcedo has earned 48 caps for the Mexico.