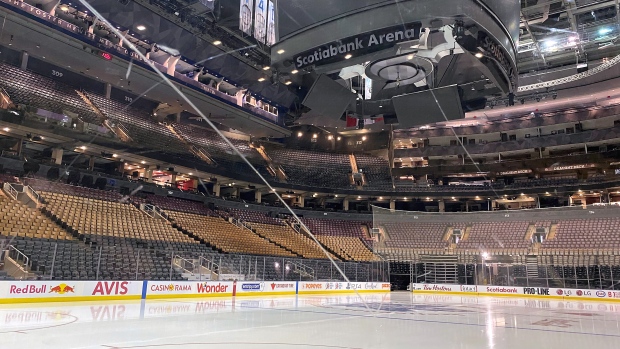 Fresh surfaced ice at Scotiabank Arena, home of the Toronto Maple Leafs, is shown in Toronto on March 12, 2020. THE CANADIAN PRESS/Joshua Clipperton

The Ontario government has announced that the Toronto Maple Leafs will be allowed to host other teams across Canada for homes games this upcoming NHL season.

Minister of Heritage, Sport, Tourism and Culture Industries Lisa MacLeod made the announcement in a statement published to Twitter Thursday, saying the decision was made following “close scrutiny of the rigorous health and safety protocols that will be adopted to keep players, staff, and our communities safe from the spread of COVID-19.”

MacLeod said this means that the Ottawa Senators will also be clear to host Canadian teams in their arena.

The news comes after months of negotiations between the respective franchises and the Ontario government, as well as members of the Ministry of Health.

The Leafs are set to host the Montreal Canadiens on Jan. 13 for their home opener. The buds will then make their way to Ottawa on Jan. 15 for the Senators home opener.

It’s unclear if the Leafs or the Senators will be able to compete against teams in the United States this upcoming season as the Canada-U.S. land border remains closed until at least Jan. 21.

Instead, the 2020-2021 season will feature a new North Division that will see the seven Canadian franchises only play one another instead of crossing into the United States for games.

In the Spring, the remainder of the suspended 2019-20 NHL season was played out in two hub cities, Toronto and Edmonton, in an effort to prevent the spread of COVID-19.

Manitoba is now the only province not to grant final approval. However, acting deputy chief public health officer Dr. Jazz Atwal said Wednesday that the province is "confident things will move ahead as planned" during the COVID-19 pandemic.

Quebec, B.C. and Alberta have already given their respective teams approval to play at home.

It’s worth noting that moments before MacLeod made the announcement Ontario’s Chief Medical Officer of Health, Dr. David Williams, said at a news conference that he and his team were still determining whether or not to approve the NHL’s proposal.

“We are assessing that, at this time, we have not made a final decision,” he said.

Last month, the league said it believed it was free to play in Canada after discussions with health authorities, but that the provinces with NHL franchises needed to give their approval.