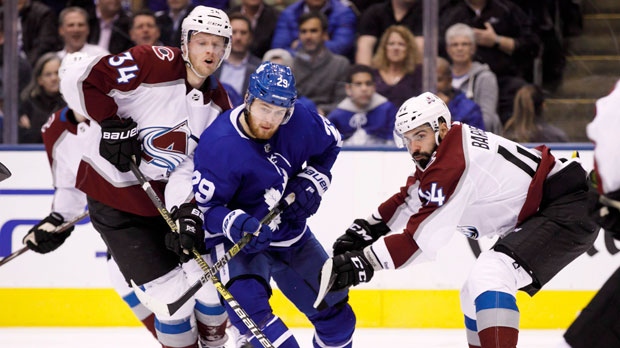 TORONTO - Carl Soderberg scored his second goal of the night with 8:15 left in the third period before adding a third into an empty net to complete his first career hat trick as the Colorado Avalanche defeated the Toronto Maple Leafs 6-3 on Monday night.

Gabriel Landeskog, Mikko Rantanen and Matt Calvert, into an empty net, had the other goals for Colorado (21-17-8), which had lost nine of its last 10 games overall (1-7-2) and seven straight in regulation on the road.

Igor Ozhiganov, Kasperi Kapanen and Mitch Marner replied for Toronto (28-15-2). Frederik Andersen made 32 saves in his return to the starting lineup after eight games on the sidelines with a groin injury. Auston Matthews added two assists.

Toronto, which entered play two points up on the Boston Bruins for second in the Atlantic Division, has lost five of its last seven games and four of five at home.

Colorado's top line of Rantanen, Landeskog and Nathan MacKinnon came in with an eye-popping 185 points on the season. Rantanen and MacKinnon ranked second and fifth in league scoring, respectively, while Landeskog was 19th.