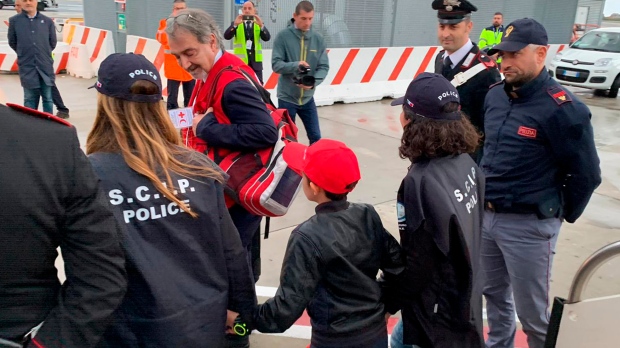 In this photo released by the Italian Police, 11-year-old Alvin, an Albanian boy who was taken to Syria by his mother when she joined the Islamic State group and then, following her death, has been freed from a crowded detention camp in northeastern Syria and returned home to Italy where his father lives, arrives at Rome's Fiumicino airport Friday, Nov. 8, 2019. (Italian Police via AP)

ROME -- An 11-year-old Albanian boy whose mother took him to Syria when she joined the Islamic State group returned on Friday to Italy for a reunion with his father and sisters.

The boy, Alvin, wearing a red cap, smiled shyly as he was escorted by two policewomen at Rome's Leonardo da Vinci airport to an airport reception where his father, Afrim Berisha, and two older sisters took turns giving him hugs.

Red Cross and Red Crescent staff worked with Albanian and Italian government officials to facilitate his return from the crowded al-Hol detention camp in northeastern Syria where he was living without his family.

The father, an Albanian, lives in northern Italy.

At an airport news conference after the reunion, officials said Alvin walks with a limp due to a leg injury from a bombing in northeast Syria that killed his mother, her new companion in Syria, a child from that new relationship and another child of the companion.

"All five of them were travelling together when they were surprised by a bombing," said Carabinieri Gen. Giuseppe Spina, from the paramilitary police force's International Cooperation Service. "Alvin is alive by miracle."

Alvin, taken away by his mother five years ago, speaks Arabic and a few words of Albanian but virtually no Italian, authorities told reporters.

Police released a video and photos of the boy's arrival in Rome, but to protect the family's privacy, the boy and his father didn't attend the news conference.

The search for Alvin in Syria began in September after his father wrote a letter, in plaintive, halting Italian to Italian authorities, seeking help to find him, authorities said.

A few weeks ago, Berisha had a reunion with his son at a crowded detention camp in Syria but wasn't immediately allowed to bring him home because no Albanian official was present to authorize the child's departure.

Italian Red Cross officials said there are three orphanages in the area where Alvin was, filled with children ages 3 to 8 who, like him, need to be reunited with family. Spina said Alvin's repatriation from a detention camp in Syria was the first such case in Europe involving help from the International Federation of Red Cross and Red Crescent Societies. Spina expressed hope other countries could do what Italy and Albania did to bring children home.

Some 70,000 persons now reside in al-Hol camp, mostly women and children, including about 11,000 foreigners. The site has been the largest holding facility for people linked to Islamic State.

Alvin has an Albanian passport but has been given permission by Italian authorities to live with his family in Italy.