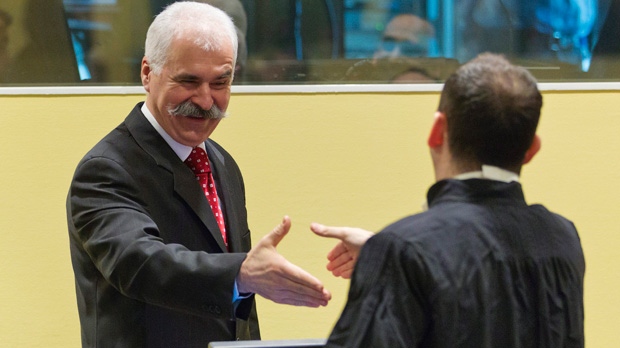 Former Bosnian Serb senior security official and police chief Stojan Zupljanin, left, shakes hands with his lawyer prior to his judgment in the courtroom of the Yugoslav war crimes tribunal in The Hague, Netherlands, Wednesday March 27, 2013. (AP Photo/Michael Kooren, pool)

THE HAGUE, Netherlands -- The Yugoslav war crimes tribunal and survivors of the bloody conflicts that ripped through the Balkans in the 1990s looked back on two decades of trials and tribulations as the court marked the 20th anniversary Monday of its establishment by the U.N. Security Council.

Court officials hailed the tribunal's legacy of putting on trial war crimes suspects ranging from heads of state to low-ranking soldiers. Activists and survivors also praised the court, but lamented how slow it has been to mete out justice.

The court's complex and lengthy trials meant that it failed to reach a verdict in the case of Slobodan Milosevic, the former Serbian president widely seen as the driving force behind the violent breakup of Yugoslavia who died in his cell in 2006 before the end of his four-year trial.

"If there is something to be held against the tribunal, then it is its efficiency," Bosnian war crimes investigator Mirsad Tokaca said in a recent interview. "It is impermissible that the trials should last so long, absolutely impermissible."

The court's president, Judge Theodor Meron, acknowledged the problem, but said it was unavoidable as the court carved out a new international legal order and tackled massive and complex crimes often committed over months or years and allowed suspects like Milosevic to defend themselves -- a process that led to lengthy political grandstanding and dragged out his case.

"I wish we could have gone faster, but I do believe that we have such special problems that if you focus on our cases you see that our progress has been quite reasonable," Meron said.

The court has proved that -- with patience and help from the international community and local authorities -- war crimes tribunals can get their hands on suspects, even if they don't have their own police force.

The tribunal indicted 161 suspects, from Milosevic to a young Serb soldier who was part of a firing squad responsible for massacring Muslims in Srebrenica, and all who survived long enough have faced justice either in The Hague or local courts.

"One of the achievements is for sure that there are no fugitives at large any more," said the court's chief prosecutor, Serge Brammertz.

Former Bosnian Serb President Radovan Karadzic and his wartime military, chief Gen. Ratko Mladic, avoided capture for years before they were finally arrested in Serbia. Both are now standing trial in The Hague, though their cases were adjourned Monday as new Dutch King Willem-Alexander joined other dignitaries for a ceremony in the tribunal's lobby.

The arrests of the likes of Karadzic and Mladic give hope to the world's first permanent war crimes tribunal, the International Criminal Court, based in a former telecom company office on the other side of The Hague, which is struggling to get custody of some of its most senior indicted suspects, including Sudanese President Omar al-Bashir and a Seif al-Islam Gadhafi, a son of former Libyan dictator Moammar Gadhafi.

Meron said that one of the tribunal's key achievements was demonstrating that an international court could deliver justice impartially.

"We showed that it is possible to have international prosecutions and international trials of people accused of the gravest offences against international law and do it in accordance with the entire panoply of principles of fairness and due process," he said.

Many Serbs disagree, saying the tribunal unfairly targets Serbs, who form the majority of its suspects.

"Serbs do not recognize The Hague tribunal at all. They are trying only the Serbs and all others have been released or will be released," said Bosnian Serb Jovo Gavrilovic.

One former leader with up-close knowledge of the tribunal's work, former Kosovo Prime Minister Ramush Haradinaj, praised the court that initially convicted him of war crimes and later acquitted him after a retrial.

"This is the only institution or arbiter that went (through) with it, so if the question is, is it worth that we have it or it would have been better not to have something like that? I must say it was worthy to have it," he said in an interview in Kosovo.

Now, as the tribunal prepares to close in coming years, its archives could underpin more prosecutions in domestic courts in the Balkans and provide a legacy that will ensure the crimes are never forgotten.

"I personally and many other victims believe that not a single war criminal would have been arrested and sentenced had there been no Hague tribunal," said Bakira Hasecic, herself a victim of war-time rape during Bosnia's 1992-95 conflict.