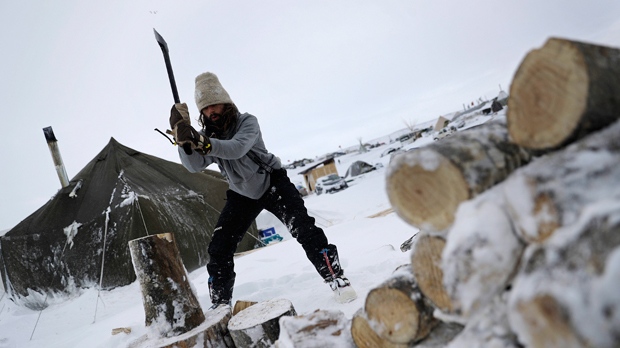 In this Tuesday, Nov. 29, 2016 photo, Blackhorse Shasta, of Oregon, chops wood on the Oceti Sakowin camp where people have gathered to protest the Dakota Access pipeline near Cannon Ball, N.D. Camp dwellers are getting ready for the hardships of a long stay. Mountains of donated food and water are being stockpiled, as is firewood, much of which has come from outside of North Dakota, the least-forested state in the nation. (AP Photo/David Goldman)

CANNON BALL, N.D. -- So far, the hundreds of protesters fighting the Dakota Access pipeline have shrugged off the heavy snow, icy winds and frigid temperatures that have swirled around their large encampment on the North Dakota grasslands.

But if they defy next week's government deadline to abandon the camp, demonstrators know the real deep freeze lies ahead, when the full weight of the Great Plains winter descends on their community of nylon tents and teepees. Life-threatening wind chills and towering snow drifts could mean the greatest challenge is simple survival.

"I'm scared. I'm a California girl, you know?" said Loretta Reddog of Placerville, California, a protester who said she arrived several months ago with her two dogs and has yet to adjust to the harsher climate.

The government has ordered protesters to leave federal land by Monday, although it's not clear what, if anything, authorities will do to enforce that mandate. Demonstrators insist they will stay for as long as it takes to divert the $3.8 billion pipeline, which the Standing Rock Sioux tribe believes threatens sacred sites and a river that provides drinking water for millions of people.

The pipeline is largely complete except for a short segment that is planned to pass beneath a Missouri River reservoir. The company doing the building says it is unwilling to reroute the project.

For several months, the government permitted the gathering, allowing its population to swell. The Seven Council Fires camp began growing in August as it took in the overflow crowd from smaller protest sites nearby. It now covers a half square mile, with living quarters that include old school buses, fancy motorhomes and domelike yurts. Hale bales are piled around some teepees to keep out the wind. There's even a crude corral for horses.

The number of inhabitants has ranged from several hundred to several thousand. It has been called the largest gathering of Native American tribes in a century.

Increasingly, more permanent wooden structures are being erected, even though the Army Corps of Engineers considers them illegal on government property. The Standing Rock Sioux insist the land still belongs to their tribe under a nearly 150-year-old treaty.

Nate Bison, a member of South Dakota's Cheyenne River Sioux, came to the camp after quitting his job in Las Vegas a week ago. He said he intends to stay indefinitely, a prospect that may cause him to lose his house in Nevada.

"But since I've lived in these conditions before, to me it's not all that bad," he said.

Camp morale is high, he added, despite the onset of winter.

"Everybody I've talked to, you hear laughter and people just having a good time, enjoying the camaraderie and the support from each other," Bison said. "And the love. People are taking the shirts off their own backs for other people. No one is left out that I've seen."

On Thursday, the camp near the confluence of the Missouri and Cannonball rivers was shrouded in snow, much of it compacted by foot and vehicle traffic. Temperatures hovered in the 20s. Next week's forecast calls for single digits and subzero wind chills.

Camp dwellers are getting ready for the hardships of a long stay. Mountains of donated food and water are being stockpiled, as is firewood, much of which has come from outside of North Dakota, the least-forested state in the nation. A collection of Army surplus tents with heating stoves serve as kitchen, dining hall, medical clinic and a camp-run school. Many of the smaller tents have become tattered by the wind.

Thane Maxwell, a 32-year-old Minneapolis native who has been living at the camp since July, said North Dakota's bitter cold will not deter protesters committed to fighting the pipeline, or "black snake" as they call it.

Tribes from the Great Plains states are adept at surviving brutal winters, he said. Others from warmer climes are being taught how to endure the frostbite-inducing temperatures that are sure to come.

"A lot of these people have been living in this climate for hundreds of years," said Maxwell a member of Minnesota-based Honor the Earth Foundation. "It's a skill set that can be learned. The danger is escalating from law enforcement, not the weather."

Reddog said she has confidence in the camp community. "Everybody's really stepping up and taking care of each other," she said.

Maxwell put out a call on social media for more donations, seeking four-wheel drive trucks and foul-weather clothing. He also asked for gas masks and protective baseball and hockey gear to shield protesters from any future skirmishes with police.

More than 525 people from across the country have been arrested since August. In a recent clash between police and protesters near the path of the pipeline, officers used tear gas, rubber bullets and large water hoses in sub-freezing temperatures. Organizers said at least 17 protesters were taken to the hospital, some for hypothermia and one for an arm injury. One officer was hurt.

North Dakota has often conjured images of a wind-swept, treeless wasteland. The perception was so great that it led to a short-lived proposal to change the state's name by dropping "North" and leaving just "Dakota," to dispel the image of inhospitable winter weather.

Morton County Sheriff Kyle Kirchmeier, who is heading the law enforcement effort around the pipeline, said he hopes the harsh conditions force people to leave the encampment, something the state and federal governments have so far been unable to do.

In addition to the federal order, North Dakota Gov. Jack Dalrymple issued a "mandatory evacuation" for the camp "to safeguard against harsh winter conditions." But he said Wednesday that the state has no intention of blocking food and supplies from coming into the camp.

Doing so would be a "huge mistake from a humanitarian viewpoint," the Republican said.

The federal deadline probably will not have any immediate effect on the camp either. Soon after it was set, the Army Corps of Engineers explained that the agency had no plans to forcibly remove anyone, although violators could be charged with trespassing.

Back at the camp, about 75 people lined up Thursday to draw propane for heating and cooking from a fuel truck. The driver, Rodney Grant, said it was his seventh trip in a week. The propane was free to campers. Grant said he did not know who was paying for it.

Dani Jo McKing, a member of the Standing Rock Sioux, was among those in line. She and her husband have been sharing cold-weather tips with people who are not from North Dakota. She said people with out-of-state license plates, including California and Nevada, have been seen driving away from the camp. The cruel winter is bound to induce others to head home, she said.

The cold weather has never bothered her.

"This is where I live. I'll stay until the end. This is God's country," she said.

Summer Moore arrived last week from Paintsville, Kentucky, and quickly learned the power of the whipping North Dakota wind. When a snowstorm rolled in Monday, it ripped her tent to shreds.

"It wasn't that cold, but the wind was so bad it knocked me down three times," Moore said.

She hitched a ride to the casino on the Standing Rock reservation and rode out the storm in a hotel room.

A carpenter named Joel Maurer came from California last month. He's been building small shed-like bunkhouses that will sleep seven people each with room for a stove.

"I know things are going to get real here real quick," he said.