Notes from the campaign trail: Leaders debate for the last time, reiterate their platforms 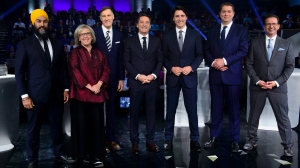 The setting might have been the same, but the French TV debate was very different from Monday night’s English mosh pit.

Organizers opted to have a series of three-way sessions, mixing up the trios, which led to much less cross talk and a little more substance. That was the good news. The bad news was that most of the time the leaders used their time to repeat their campaign lines.

The lead off topic focused on the climate change and that led to the leaders repeating their positions on the environment.

The debate got more pointed around the word “pipeline”. Liberal leader Justin Trudeau refused to rule out a pipeline in Quebec saying “none is planned at this time.” Andrew Scheer, the Conservative leader, talked about the need for an energy corridor. The People Party’s Maxime Bernier was four square for a pipeline. That left Elizabeth May of the Greens, the Yves-Francois Blanchet of the Bloc Quebecois and Jagmeet Singh of the NDP to commit to no pipeline. With the notion of a pipeline unpopular in Quebec that position might have given Blanchet the edge on one more issue over the Liberals and the Conservatives.

The leaders were asked a question about the rights of Canadians and privacy in the digital space but the answers were again limited to less than 30 seconds.

Like the English debate, no leader was given more than a minute to address any of the questions.

That meant the leaders were forced to make quick jabs and hope viewers react positively to those barbs.

Scheer called Trudeau a liar at every opportunity. But as in the English debate Scheer had few one on one opportunities to face off with Trudeau. Singh also tried to make his mark against Trudeau saying he swings left during election campaigns and governs from the right. Blanchet hung back unless he could make a point that appealed directly to Quebec voters.

If, after this final debate, the reviews and polls in Quebec are not good for Scheer and Singh, watch for them to turn their focus to English Canada in the final days of the campaign.

Trudeau has the seats his party needs to protect in Quebec, if it is to have any chance of forming a majority government.

After the debate the man to watch in Quebec, Blanchet, said he thinks the attention on him might be because, over the last few days, the Bloc has become a “significant player in politics” in the province and the party has “gained respect” during the campaign.

A poll from Mainstreet released Thursday has the Bloc just ahead of the Liberals in Quebec. That number, it if is supported by other polls in the coming days, should worry the Liberals.

The Conservatives and NDP will do some housekeeping on Friday. Scheer will fly to Vancouver and release his party’s platform. Jagmeet Singh will be in Toronto to release the costings on his platform. Both parties have made billions in promises. Scheer insists the platform the Liberals released is not fully costed.

It will be interesting to see how much funding detail both the Conservatives and NDP lock themselves into.