Notes from the campaign trail: Leaders have less than a week to make their case 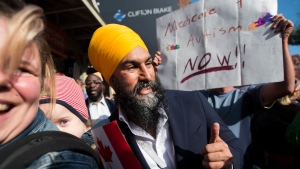 NDP leader Jagmeet Singh poses for photographs during a campaign stop in Toronto on Tuesday, October 15, 2019. THE CANADIAN PRESS/Nathan Denette

The big policy announcements are over with. The platforms are out there for voters to judge. For the party leaders the 2019 federal election campaign is now about selling their vision of Canada for the next four years and attacking their opponents when necessary.

It started in New Brunswick Tuesday morning with Liberal leader, Justin Trudeau. He had a few words about health care and access to doctors and then warned his main rival, Conservative Andrew Scheer, will cut services. Trudeau repeatedly told reporters voting for Scheer’s Conservatives will lead to “cuts and austerity.”  He came back to Conservative cuts again and again saying “voting Liberal is the only way to stop Conservative cuts.” After sweeping Atlantic Canada in 2015 the Liberals know some seats will be lost. Trudeau campaigned in New Brunswick and Nova Scotia trying to shore up Liberal support in ridings that might be at risk.

NDP leader Jagmeet Singh is coming off a holiday weekend that gave him one positive headline after another. And poll after poll keeps giving Singh stronger numbers. Even NDP supporters think the party will still lose seats on election day.  But the dire pre-campaign NDP predictions, including losing party status, are gone. On the weekend Singh tossed out the notion of a coalition with the Liberals and then walked it back the next day. That was enough to let voters know a Liberal minority will have some kind of support from the NDP.  Singh repeated a winning line from the debates that the Liberals campaign like progressives and govern like conservatives. On Tuesday he said voters are “not stuck with two choices” and voters should not “vote for fear but vote for hope.”

Andrew Scheer spent the day in Quebec. A Forum poll released Tuesday morning has the Conservatives down to 15 per cent in Quebec with the Liberals (33%) and Bloc Quebecois (31%) in a statistical tie for first place. Today Scheer tried to say all the right things for his Quebec audience. He promised to “always work with Quebec” and Scheer said, “I need the Quebec nation to replace Justin Trudeau.” Scheer is talking about a Liberal/NDP coalition whenever he can holding it up as the worst possible result for Canada. Scheer won’t answer questions about a Conservative minority insisting his job is to produce a Conservative majority.

The problem is that voters in Quebec are moving to the Bloc and changing the dynamic of the election in Quebec. With a week to go it appears all three leading parties will be losing seats in Quebec.  Bloc leader Yves-Francois Blanchet won’t be crisscrossing the country in the last days of the campaign. He gets to focus solely on the 78 seats in Quebec hoping build on his party’s new found popularity. Blanchet’s goal is to pick off as many seats as possible on October 21 and deny either the Liberals or the Conservatives a majority government.  Tuesday Blanchet targeted two Quebec City ridings with Conservative incumbents.

The official numbers will be released Wednesday but it looks like there will a record turn-out in the four days of advance polls that ended Monday. Pundits talk about a deciding “ballot box” question in an election but with less than a week to go there is no over-arching issue that is commanding the attention of voters. Look for the leaders to sharpen their attacks and target their campaign stops to hit ridings that are in play for their party. Behind the scenes the real game is just beginning. It’s called the ‘ground game’ and is all about getting voters to turn out on Monday after what many are calling a campaign about not a whole lot.