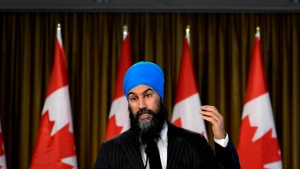 BURNABY, B.C. - NDP Leader Jagmeet Singh says there's nothing wrong with Canada - it's the electoral system that is broken and in need of repair.

That was Singh's morning-after assessment of a federal election election result that saw his party relegated to fourth place in the House of Commons behind the Bloc Quebecois.

The Liberals under Justin Trudeau eked out a minority government victory, and managed to do it with just 33 per cent of the popular vote, compared with 34 per cent for the Andrew Scheer Conservatives.

That translated into 157 seats for the Liberals and 122 for the Conservatives, leaving New Democrats with 24, including a near wipeout in Quebec where the resurgent Bloc grabbed 32 seats.

Singh, who anticipates working more closely with the Liberals in the upcoming Parliament, says he plans to push for a proportional representation system, which would have given his party more seats based on its 16 per cent slice of the popular vote.

Trudeau broke a 2015 pledge to reform the electoral system and get rid of the current first-past-the-post system in which the candidate with the highest number of votes claims victory.