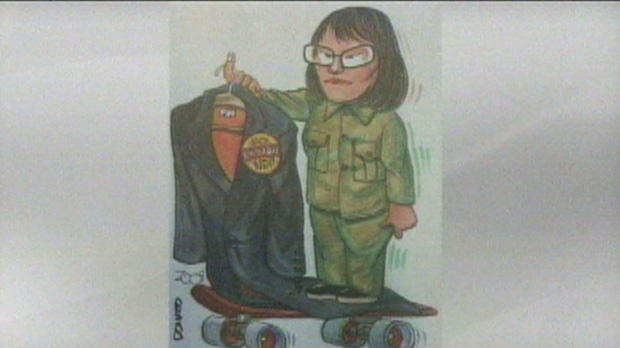 Olivia Chow called this editorial cartoon published in The Toronto Sun both 'racist' and 'sexist.'

The drawing, which was published in The Sun on Sunday, shows Chow, dressed in what appears to be an outfit worn by Chairman Mao, stepping on the coattails of a jacket with her late husband Jack Layton’s name on it.

“Because I am Chinese-Canadian, I must be a communist and have slanted eyes and glasses … and since I am a woman, I must be inferior and therefore not good enough for the job of the mayor so I must rely on my deceased husband so it is both racist and sexist.”

Chow said she is surprised to see these types of stereotypes still circulating today.

“I remember getting that kind of attack in the 80s when I first became a school trustee,” she said.

“I thought those kind of racial stereotypes were long past us and then to bring up my deceased husband and to drag him in… it is just quite outrageous.”

When contacted by CP24, Toronto Sun publisher Mike Power declined to comment on the cartoon.

“It is up to them to decide what to do. I think the good people of this city, a lot of them are immigrants, I hope that they feel that they are insulted too,” she said.

“It goes to prove that we need to stand firm against racism because it still exists.”