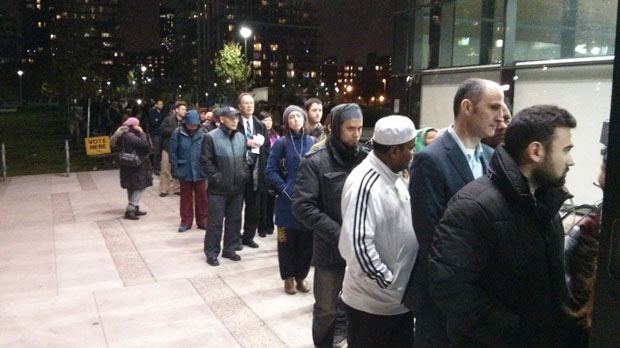 About 200 people are lined up outside the polling station in Regent Park at 620 Dundas St. (Ken Regular/ CTV News)

The polls close at 8 p.m. but large lineups at Toronto polling stations could mean we will have to wait a little longer for results.

With a record number of Torontonians turning out to advance polls this year, Toronto could see some exceptionally high numbers tonight as well. Anyone in line at 8 p.m. will be permitted to cast their ballot.

The line to vote wraps 5 times around the gym. People are leaving because they're sick of waiting#wtftoronto #TOpoli pic.twitter.com/4pcr1Yn24w

A line of over 100 people just to get through the door to vote at Regent Park Aquatic Centre. #TOpoli pic.twitter.com/AiVEKeVjNK