Key dates in the life and career of John Tory 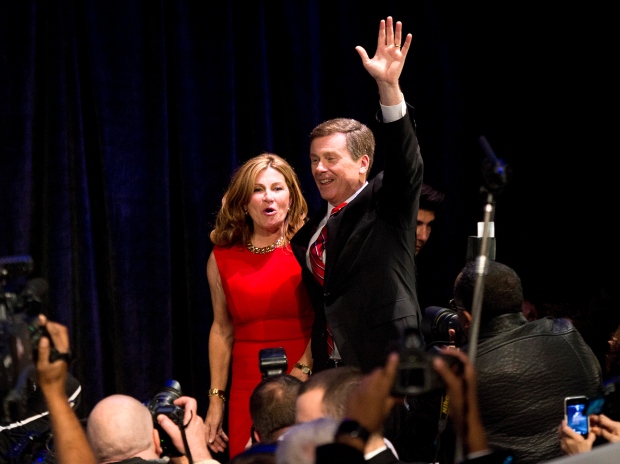 John Tory, right, and his wife Barbra Hacket react after he won the civic election to become the new mayor of Toronto on Monday, Oct. 27, 2014. (The Canadian Press/Nathan Denette)

TORONTO -- John Tory will replace Rob Ford as mayor of Toronto after winning the municipal election on Monday. Here are a few key dates in his life and career.

May 28, 1954: John Tory is born in Toronto to prominent lawyer John Tory and his wife Elizabeth Bacon.

1978: Tory marries Barbara Hackett, with whom he has four children.

1980: Tory began work as a lawyer at Torys LLP, the law firm founded by his father.

1986: Following Davis's retirement, Tory returns to the law firm where he remains for the next decade. During those years, he serves as volunteer campaign chair for Conservative prime ministers Brian Mulroney and Kim Campbell.

1992: Tory joins the board of the Canadian Football League.

Jan. 12, 1995: Tory takes over as chairman of the Board for the president of Rogers Multimedia Inc.

Nov. 10, 2003: Tory is defeated in his first effort to become mayor of Toronto, garnering 38 per cent of the vote but falling short of winner David Miller.

Mar. 17, 2005: Tory easily cruises to victory in a byelection in Eves' old riding of Dufferin-Peel-Wellington-Grey, earning his seat in the Ontario legislature.

Oct. 10, 2007: After a campaign marred by unpopular promises to extend public funding to faith-based schools, Tory and his Conservatives are soundly defeated in the provincial election. Dalton McGuinty's Liberal government returned to power with a majority mandate, while Tory lost his own seat in the legislature.

Mar. 5, 2009: Tory's bid to reclaim a seat in the legislature is dashed with a surprising byelection loss in the riding of Haliburton-Kawartha Lakes.