BRAMPTON, Ont. - Brampton's controversial Mayor Susan Fennell has lost her bid for re-election amid a spending scandal that rocked the city northwest of Toronto.

Fennel had been seeking a fifth term in office. 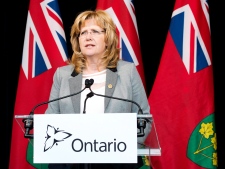 Linda Jeffrey speaks to the media in this file photo. (The Canadian Press/Nathan Denette)