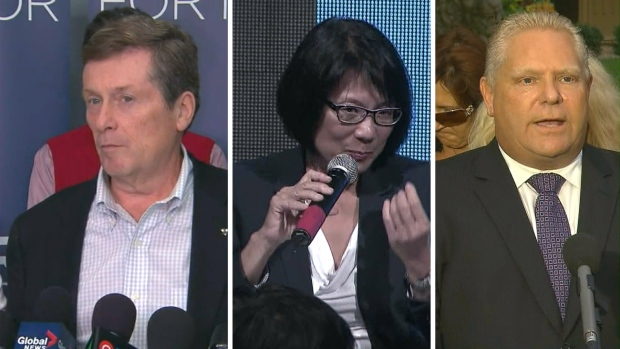 The Toronto Environment Alliance released a 'report card' Thursday detailing how each of the leading mayoral candidates stack up on environmental issues.

In a survey, TEA asked Olivia Chow, John Tory and Doug Ford to answer 18 ‘yes’ or ‘no’ questions gauging each candidate’s commitment to making Toronto a greener city.

The three were asked to answer questions about air quality, TTC service, and severe weather preparation.

Olivia Chow was given the highest score with a grade of 83 per cent, John Tory received a score of 61 per cent and Doug Ford, who did not respond to any of the questions, was given a zero.

Chow committed to advancing four more initiatives than Tory, however, TEA said it was clear Tory gave a “considerable amount of thought to his answers” by submitting “extensive” comments along with his survey answers.

“Mr. Tory has committed to 11 important actions that will build a greener city, including taking important steps towards getting the city ready for climate change and reducing waste,” the report card read.

“It’s clear from his survey comments that while he could not say yes to some key actions, he will seriously consider them.”

Chow’s commitment to stopping the Island Airport expansion, her support for “moving aggressively to higher waste diversion,” and her promise to find new revenue sources to fund TTC service, are some of the items that set her apart from Tory, TEA said.

In the report, TEA claims that Doug Ford “has shown no commitment to the environment during this election nor in the last four years.”

“His environmental voting record during the last council term was one of the worst on council,” the report read.

“Ford has yet to realize that saving taxpayers money should include taking actions that will reduce the huge costs of health care (that come from bad air quality and toxics in our air and water) and of climate change.”

TEA has also drafted a report grading each Toronto city councillor on their support for TEA's environmental priorities.