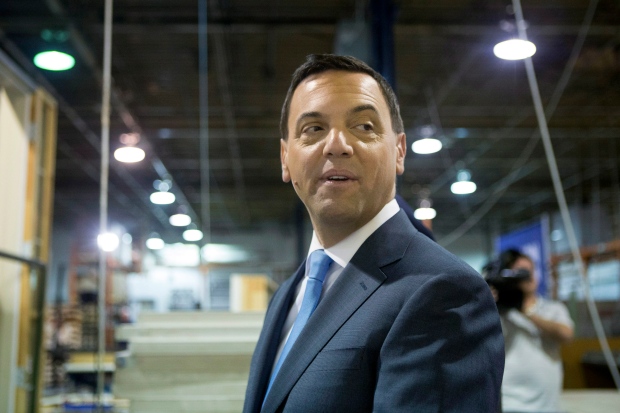 Ontario PC Leader Tim Hudak arrives at a campaign rally at a windows manufacturer in Mississauga, Ont., on Wednesday, June 11, 2014, as he continues his election campaign. (The Canadian Press/Chris Young)

MISSISSAUGA, Ont. -- Liberal Leader Kathleen Wynne has changed since becoming Ontario's premier and will do things to keep that job that she never would have considered before, Progressive Conservative Leader Tim Hudak said Wednesday.

With less than 24 hours until the polls open, Hudak complained that in the dying hours of the election campaign Wynne accused him of being a dangerous threat to students while the Liberals released an "over the top" flyer that depicted the PC leader laughing as a hospital explodes in the background.

"Kathleen Wynne has certainly changed since she got into office to cling to power, and that's not a positive change," he said at a window factory in the NDP-held Mississauga riding of Bramalea-Gore-Malton.

"I think when you go that far across the line, then it's time to pack it in because it's now all about Kathleen Wynne keeping her job."

At a campaign stop in Toronto, Wynne said the flyer, which imposed Hudak's image over top of the psychopathic character the Joker from the Batman movie "The Dark Knight," was "not acceptable" and not in keeping with the Liberals' campaign style.

But Hudak continued to complain about the Liberal handout, which went to voters in Vaughan, north of Toronto, as he attended small rallies at PC campaign headquarters in NDP-held ridings in Kitchener-Waterloo and Niagara Falls.

"Sadly, that's not the Kathleen Wynne that I've known," he said. "I never thought she would stoop that low."

Wynne is visiting schools and hospitals as part of her "campaign of fear," added Hudak, who insisted he's offering voters a positive message about new jobs and a better economy.

"We've talked every day about our optimistic and bold plan to get people back to work, and in the last 24 hours I'm going out with a campaign of hope," he said. "I know that hope is going to trump fear come Thursday night."

The PC leader rejected Liberal accusations that the Tories tried to suppress the vote in at least two ridings, in Ottawa and London, with letters directing people to the wrong polling stations. The party sends out tens of thousands of letters to try and make sure their supporters actually go to the polls, said Hudak.

"We send out letters to people that we hope are going to vote for the PC party, and honest mistakes are made when we sometimes don't have the right polling information," he said. "Our candidates have apologized for that clerical error."

Tory officials said the PC candidates in both ridings were also hand-delivering notices to make sure voters get the right information about where their polling stations are actually located.

The Liberals claimed the original notices were not on PC letterhead, but Hudak said the party's logo was on the outside of the envelopes and they were clearly branded.

Hudak also laughed off questions about whether or not he'd be forced to resign immediately if the Conservatives don't win enough seats to form government.

"I feel momentum is on our side," he said. "People want change and I know our message of hope and turning things around is going to come through on election day."

Hudak planned to wrap his day of campaigning with a town hall meeting in Jarvis, in the longtime Conservative stronghold of Haldimand-Norfolk.