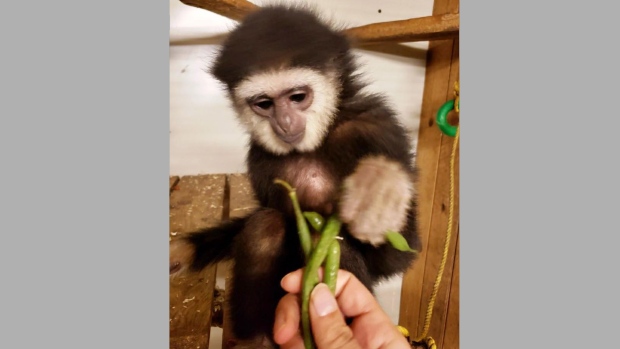 Agnes, a Gibbon monkey who was stolen from the Elmvale Jungle Zoo near Barrie, is pictured. (Handout /OPP)

A gibbon monkey named Agnes is back home after police found the stolen animal in a raid on a house in Quebec.

“We are happy to have Agnes home with her family. In the coming weeks, she will be slowly re-introduced to her cousins, Jasmine and Gracie, and reintegrated back into the zoo community,” zoo employee Michel Persi said in a statement released through Ontario Provincial police.

Agnes was one of three animals stolen from the Elmvale Jungle Zoo in a break-in back in May. OPP said Monday that she was found on Oct. 18 when local police in Ville de Mascouche, Que. executed a search warrant at a home there.

A lemur named “J.C.” was found on June 4 by motorists driving in a rural area north of Montreal. Stanley the tortoise remains outstanding and investigators are still trying to track him down.

Persi said the zoo will remain closed for the remainder of the winter season to help reduce the stress on Agnes.

Two people have been charged in connection with the theft of the animals.

Alex Pearlmutter, 22, of Sunderland, Ont. and Adrian Frei, 21, of East Gwillimbury, Ont. have both been charged with break and enter and theft.

Anyone with information about the whereabouts of Stanley the tortoise is being asked to contact investigators.