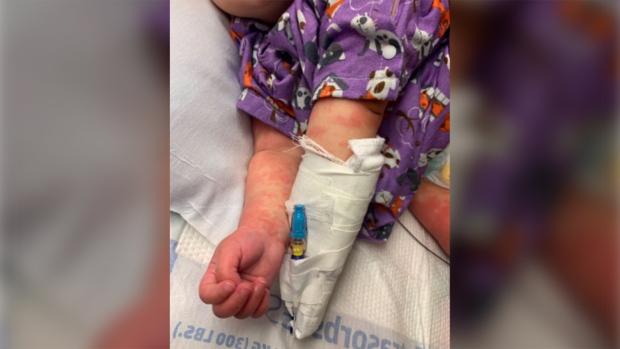 Upper extremity erythema and edema inflammation can be seen on a child in this image. (CTV NEWS)

Ontario has seen no more than two dozen cases of a rare inflammatory syndrome in children possibly linked to prior COVID-19 infection, doctors at Sick Kids Hospital said Tuesday.

In the United States and Europe, alarm was raised earlier in the pandemic as children often with no underlying medical conditions were brought to hospital suffering from severe swelling of extremities, prolonged high fever and bloodshot eyes.

In the U.S., at least three of the cases identified were fatal.

But since the start of the outbreak, Dr. Jeremy Friedman of Sick Kids Hospital says doctors have treated 24 children for symptoms consistent with the disease, and none of them have tested positive for COVID-19 using the nasal swab PCR test.

He added that all the children recovered easily with treatment using an intravenously-delivered steroid or just aspirin.

While the children tested negative using the PCR test, which detects the active presence of the virus, they have not tested the children’s blood for the presence of antibodies indicating a prior resolved COVID-19 infection.

Friedman says the hospital is still waiting for "approval" to conduct blood tests to look for COVID-19 antibodies.

It is believed the disease occurs as a result of an “overzealous delayed immune response,” from the child’s body to the presence of the novel coronavirus, Friedman said.

A total of 1,441 people aged 19 or younger have tested positive for COVID-19 since the outbreak reached Ontario in late January.

Friedman said that Sick Kids has tested more than 5,000 children for COVID-19 since the outbreak began.

Of those, less than 30 kids came back positive, and only seven required admission for treatment of the virus.

The low incidence of the syndrome is just one of many themes doctors at Sick Kids have identified that indicate the impact of COVID-19 is lower on children than adults, as they encourage the province to get schools back up running in September.

“Children by and large do not get very sick from coronavirus,” Sick Kids President Ronald Cohn said Wednesday, as the hospital released its guidelines for safely returning kids to school in September.

They say there is a growing body of research available around the world that indicates children transmit the virus less often to others than adults do.

“Generally what we see is that children get infected from adults, not the other way around,” Cohn said, stressing that conclusion is preliminary and will require much more study in the coming months.

They also say that the continued isolation of children from their friends and activities could pose a greater risk to their mental health than the risk of possible exposure to the virus.

“The impact on mental health, developmental and behavioural health of children not going to school – is something that myself and many of my colleagues in pediatrics are literally losing sleep over,” Cohn said Wednesday.

The hospital’s guidelines released Wednesday encourage schools to limit large gatherings such as assemblies, but say play on the playground, even the type that doesn’t involve distancing, is okay.

“We need to diminish closeness – but strict emphasis on distancing is not really practical,” Dr. Michelle Science said.

Classrooms should be ventilated with open windows were possible. Kids should not share food or drink and toys should be sanitized more frequently than normal.

The hospital’s experts do not advise schools take everyone’s temperature upon entry, saying that fever only presents in 50 per cent of symptomatic cases. But anyone with symptoms should stay home and get tested as soon as possible.

They also say masks are not needed for students and teachers at school. Ontario's Ministry of Education tasked Sick Kids Hospital with developing guidelines for the resumption of school and childcare last month.

Speaking about Sick Kids' guidelines, Ontario Premier Doug Ford said the province would listen to what the hospital's doctors are recommending.