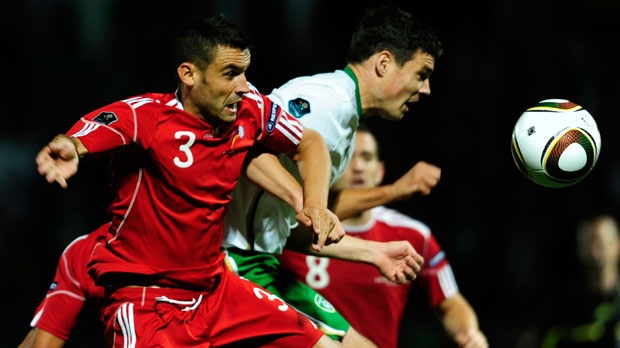 The 25-year-old Irish international will make his debut Saturday when the Reds host Sporting Kansas City, and it comes at a time when Toronto is struggling with defensive breakdowns, especially on set pieces.

Mariner was livid with his squad on Wednesday after allowing a corner kick goal in the 21st minute of a 2-2 draw with Portland. On Friday, he ran multiple drills on dead ball situations as new face O'Dea assumed his role as the backline's new "general."

"It's quite obvious the team needs to stop conceding so many goals," said O'Dea. "There's a lot of publicity about set pieces and in football it's tough enough keeping clean sheets without conceding set pieces. We're trying hard not to do that and hopefully we can start tomorrow."

Mariner has long preached the importance of a "big boss" on the defence and in O'Dea, who has 14 caps for the Irish and spent six seasons with Scottish League perennials Celtic, he believes he's found it.

"He's a different specimen," said Mariner. "It's all about habits. He's got fantastic habits on the field, off the field. You can see the way he commands himself. He's beautiful for us back there. I think the fans are really going to take to this kid."

O'Dea was signed Aug. 3, but had his debut put on hold first by the rescheduling of Toronto's Aug. 11 match against Columbus, allowing for members of the Crew to attend the funeral of former teammate Kirk Urso, and again on Wednesday to due international duties.

Ireland played a friendly with Serbia in Belgrade on Wednesday. Less than 48 hours later O'Dea was on Toronto's practice pitch bolstering the defence.

"Today was important to get the rubbish out of my legs and shake it off," O'Dea said. "I'll be ready for tomorrow. I'm itching to get going."

His first MLS test won't be an easy one, as Eastern Conference-leading Kansas City (13-7-4) looks to win its third straight league game and stay unbeaten in five overall.

SKC's last meeting with the Reds was a 2-0 victory at Livestrong Sporting Park in Mariner's first game as manager after taking over from Aron Winter.

Toronto is dead last in the Eastern Conference at 5-13-5 and winless in its last three MLS games.

"The service is fantastic from Zusi, assuming he's playing, and they're very aggressive and we've got to match it," said Mariner. "We haven't really been matching it and that's been a bit disappointing."

Johnson, who leads the team in goals with five behind injured Dutch striker Danny Koevermans, will likely slide into the midfield while Frenchman Eric Hassli and Luis Silva continue their attacking partnership on the frontline.

The duo yielded a goal each against Portland in the second half, with Hassli getting an assist on Silva's goal in the 63rd.

"Luis is a great player. He has great feet," said Hassli, whose goal in the 57th was his first for the club. "It was crazy. Thanks to Luis too, he did a great job for me."

While Hassli and Silva keep SKC goalie Jimmy Nielsen busy, TFC 'keeper Milos Kocic knows he needs to do more to protect his end of the field. He's looking forward to having new teammate O'Dea give him some support and take charge while defending dead ball situations.

"I don't want to put pressure on the guy, let him be himself and bring what he brings to the game, which is exactly what we need at this moment -- take charge of the backline, make sure to communicate and get on the guys who are not doing their job."

Each month, Mayor John Tory answers viewer questions about the latest happenings going on in the city.

Get real-time traffic information for Toronto, GTA and surrounding areas.

CP24 is pleased to offer you breaking news e-mail alerts that will keep you up-to-date on the latest breaking news.